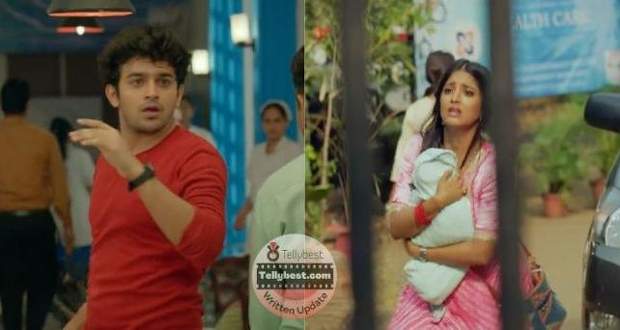 Banni then informs Vishnu that she will run away from the back door since her taxi is waiting and Vishnu needs to keep Kabir busy till then.

However, while Banni is walking outside the baby towards the taxi, Kabir comes out of the house just then and starts yelling he will kill Banni Chow in a cold voice.

Banni gets frightened hearing Kabir’s voice and finding a random car in front of her, Banni gets into it quickly to save herself and the baby.

However much to Banni’s misfortune, that car turns out to be Kabir and when Kabir enters the car, Banni quickly hides behind the backseat.

Meanwhile, Vishnu tells Kabir that Banni has gone to a temple which is located near the riverbank.

In the meantime, before starting the car, Kabir orders Banni’s colony people to prepare for Banni’s funeral as he is returning with her corpse.

Afterward, Kabir starts his car while Banni is sitting in the backseat of the car holding her breath.

Kabir then feels as if someone is in the car but when he turns around to check, he does not find anyone.

When the “Tadap Tadap” song starts playing, Kabir’s face get softens as he recalls his sweet memories with Tulika and her dead body.

On the other hand, Banni’s eyes also get moist as she too starts recalling memories of her beloved Yuvan.

In the meantime, in Rathod’s mansion, Veer tells everyone that he has told the police commissioner to give Banni police protection.

Devraj who is tired of this Kabir’s tantrum breaks down in tears and tells everyone in between sobs that he is confused about what he should be upset about first - Tulika’s death or the fact that Yuvan’s baby is no more.

Viraj then gets a call from Vishnu who informs him that Kabir visited their home but Banni ran away and now he does not know where she is.

As soon as Viraj cuts the call, Devraj orders him to find Banni before Kabir, and Viraj nod.

On the other hand, when Kabir arrives at the start of the jungle and goes inside to look for Banni, Banni comes out of the car and runs away.

Afterward, pulling the baby in her arms, Banni tells him that she will not let any harm touch him as per her promise to Tulika.

While Banni hides the baby in a basket behind some bushes, Kabir arrives there and Banni goes to face him.

During the chaos, Kabir hears a tiger growling and despite Banni’s pleading to let her go, he ties her to a tree.

Banni yells that it will not bring Tulika back but Kabir walks away muttering this will give peace to Tulika’s soul.

However after Kabir walks away, a tiger arrives in front of Banni and Banni faces it like an angry mother who is on a mission to protect her baby.

She quickly frees herself and starts scaring the tiger with a stick with fire.

© Copyright tellybest.com, 2022, 2023. All Rights Reserved. Unauthorized use and/or duplication of any material from tellybest.com without written permission is strictly prohibited.
Cached Saved on: Wednesday 25th of January 2023 09:47:03 AMCached Disp on: Monday 6th of February 2023 06:03:28 AM