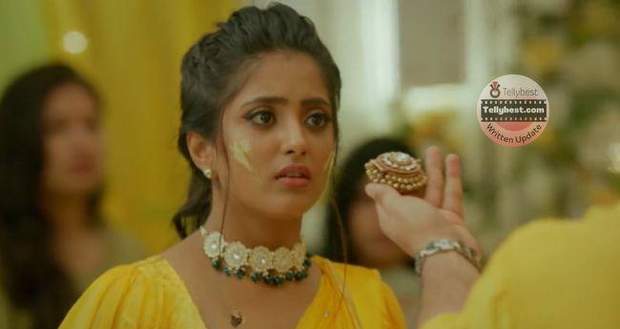 When Agastya does not move, Kabir yells that he knows Banni is doing drama to bring Yuvan out as Banni does in an angry voice.

He then also adds that someone has told Kabir beforehand about Banni and Agasthya’s fake marriage.

A flashback shows while Kabir is worriedly thinking that Yuvan will go out of control seeing Banni with Agastya.

He then gets a notification on his phone which informs him about Banni’s fake plan and smirks as he thinks someone except him also wants Banni to fail.

Back in present, while Kabir is playing the dhol, Tulika is thinking about who can send Kabir the text.

Later, Agasthya informs Banni that if she is not able to bring Yuvan back then Tulika’s life will also be ruined since Kabir is marrying Tulika the next day.

Tulika further decides to text Banni the truth but before she can send the text, Kabir arrives there and snatches the phone away.

Kabir then threatens to kill himself with a knife but Tulika stops him after a lot of struggle.

Tulika then hugs Kabir tightly and yells that she cannot lose Kabir ever again as she loves Kabir very much.

Meanwhile, in Rathod’s mansion, Agasthya gets a text notification from Kabir which urges Banni to come to the hall.

After Banni walks away, Agastya feels glad for not sending the text as he cannot betray Banni’s trust.

Meanwhile, Kabir tells Banni that on one hand, he will marry Tulika and on the other hand, Banni will celebrate Yuvan’s death.

However, before Kabir can fulfill his task, Banni snatches the garland away fiercely and announces that Kabir will die not her Yuvan.

On the other hand, Viraj checks Veer’s phone to see if he has informed Kabir of the truth but gets stunned when he finds Veer innocent.

Later, after checking the CCTV footage, Banni announces that she will steal Kabir's phone after feeding him sleeping drugs with food.