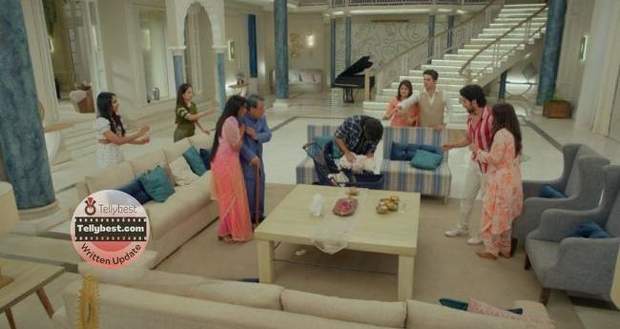 Today's Banni Chow Home Delivery 1st January 2023 episode starts with Banni telling everyone about how Charmie asked her to share Kanha with her after she found out about Shrey is mentally unstable.

Once Banni stops, Devraj angrily asks Charmie if Banni is telling the truth and Charmie angrily announces that this is half true.

Charmie further announces that Kanha is Tulika-Kabir’s baby due to whom Tulika lost her life.

While everyone looks shocked, Banni yells that it was Tulika’s wish to give Kanha the family and his father’s love with tears in her eyes.

When Charmie tells everyone that she wanted to give Kanha the family as Kabir would not accept him if he knew the truth, Banni replies that Charmie wanted the baby for herself since she is not able to accept Shrey as he is.

However, Charmie reveals to everyone that Banni ordered the doctor to lie to save Kanha from Kabir's wrath.

Banni also announces that the only reason she is here is because of Kanha as she wants to give fatherly love and family attention.

Meanwhile, Viraj throws some things on the floor in fuming anger and accuses Charmie of rejecting their son Shrey.

He even questions Charmie about what she would do if she has lost Shrey but before Charmie can answer, he again announces that Charmie would toss the baby in the dustbin and seek happiness in someone else’s kid.

Pulling Charmie into a hug, Viraj reminds her about Yuvan’s situation and how Banni has cured him so they can also cure Shrey with their love and care.

With her hands folded, Charmie announces that she will not tell Kabir anything about Kanha being Tulika’s baby.

Kabir who was walking into the hall with milk in his hands gets shattered after hearing the truth and the milk bottle slips from his hands.

When Banni looks up, she finds Kabir fuming in anger and Kabir angrily questions Banni if Charmie is telling the truth.

In reply, Banni tells him that indeed Kanha is his and Tulika’s baby but she lied to protect Kamha from Kabir’s wrath.

Banni further adds that it was Tulika’s last wish to give Kanha the love of the family and Kabir which makes Kabir’s eyes go wide.

At the same time, Atharva starts crying and Kabir picks him up in his arms while he recalls Tulika’s dead body and how the doctor told him that it was Tulika’s wish to keep the baby alive.

Hugging Kanha to his chest, Kabir lets out heart-shattering scream which causes everyone to look at him with anxious eyes.

However, later, Kabir locks himself in the room and does not open the door despite Banni’s nonstop urging.

Kabir numbs his pain by playing the violin whereas Banni sits outside the door to wait for Kabir to come out.

Later, in the night, Devraj comes to take Banni away so she can eat something but Banni announces she will wait for Kabir.

Once Banni falls asleep, Kabir packs his suitcase and comes out of his room.

Finding Kabir waking away, Banni asks him how he can leave his responsibility since Tulika has sacrificed her life for Kanha.

However, Kabir refuses to stay with Banni and Banni is about to fall but Kabir catches her.

Due to this, Kabir’s injured arm starts hurting and he falls unconscious.