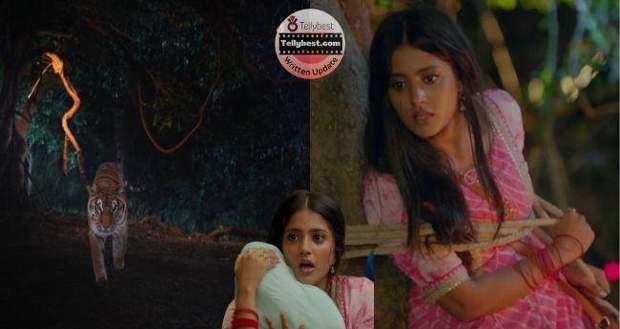 Once the tiger walks away, Banni holds the baby in her arms while the feeling of relief washes over her, and she breaks down in tears.

Afterward, Banni arrives at her home and starts taking care of the crying baby like a mother.

Meanwhile, in Rathod’s mansion, Kabir gets sad looking at Tulika’s picture and his blood boils as he recalls the doctor’s words about Tulika choosing to save the baby instead of herself.

Devraj enters the room just then and when he puts his hands on Kabir’s shoulder, Kabir announces if he is here to get Banni’s information then Devraj should know he has not killed Banni.

Kabir even tells Devraj that he wants to see the cause of Tulika’s death Banni suffer and hearing this, Devraj’s hand drops from Kabir’s shoulder and Devraj walks away.

On the other hand, in Banni’s home, Banni makes a swing for the baby and once she puts the baby in the swing, Banni’s eyes get teary recalling Tulika’s promise.

She even wraps the baby in Yuvan’s t-shirt thinking Yuvan will come back to hold her.

Meanwhile, in Rathod’s mansion, while Charmie and Viraj are passing by Yuvan’s room, they hear some sounds and go to check.

Finding Charmie’s baby crying, Kabir orders her to take the baby away otherwise he will kill it.

After Charmie walks away, Kabir angrily growls that form now on Banni and the babies are banned from this house.

He then puts a white garland around Tulika’s picture and his heart breaks into million pieces.

After one month passes, Banni is getting ready in her room when she questions Kahna, Tulika’s baby if she looks presentable or not.

Banni even asks Kahna if his father will like it, and Kahna just giggles.

Charmie arrives there just then and expresses her gratitude to Banni for coming back as Kabir has made it impossible to live with him in the mansion.

While Charmie plays with Kahna, Banni announces she is here now to take care of the Rathod family, and Charmie is happy.

In the meantime, in Rathod’s mansion, while Veer and Viraj are discussing how Kabir has taken the property from them very cunningly, a waiter records this, and Kabir is relaxing in the bathtub.

Myra also joins them at the breakfast table and murmurs that they are just a fake family without Banni and Yuvan.

Vrinda also announces Kabir is doing tandav on their head and they are not able to do anything.

However, everyone falls silent when Kabir joins them at the breakfast table, and Kabir orders Viraj to give him back the expensive wristwatch and coat.

Viraj looks at Kabir with wide eyes and Kabir orders him to follow the order since Viraj thinks he is a servant so he should also look like one.

While Viraj follows Kabir's order reluctantly, Kabir orders Myra to write she does not miss Banni and Yuvan a thousand times as a punishment and Myra walks away.

Afterward, Kabir even orders Veer to eat rasgulla despite knowing he has diabetes, and looking at Vrinda sternly, Kabir questions her if he is doing the tandav perfectly or not.

Later, Devraj finds Kabir giving money to a servant who is severely ill and he gets surprised.

Devraj then questions Kabir why he behaves arrogantly with the family and Kabir announces he is doing precisely the same thing they have done to him throughout his all life.

Deraj falls silent after hearing it and Kabir tells him he has huge respect for Devraj in an emotional voice.

When Kabir gives Devraj a wristwatch, Devraj gets emotional.

© Copyright tellybest.com, 2022, 2023. All Rights Reserved. Unauthorized use and/or duplication of any material from tellybest.com without written permission is strictly prohibited.
Cached Saved on: Wednesday 25th of January 2023 01:03:47 PMCached Disp on: Tuesday 31st of January 2023 06:59:11 PM