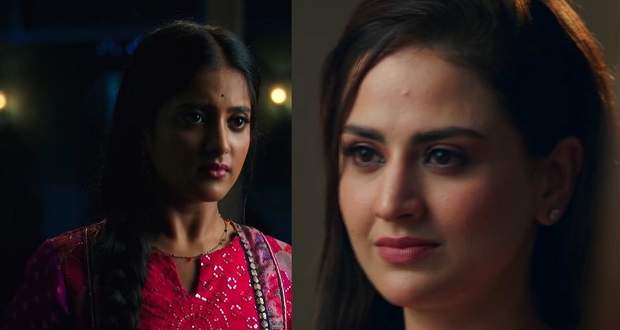 Today's Banni Chow Home Delivery 20th July 2022 episode starts with Banni sending the child to the hospital while the rest of the people ask Banni to take others to the hospital as well and she will bear expenses.

However, people get angry and tell her that she cannot go until the matter is resolved.

Meanwhile, Yuvaan drops juice on his clothes and Manini takes off his jacket and finds a patch on his arm.

Viraj threatens Yuvan into speaking the truth or else he will beat him.

Yuvaan confesses to Viraj and Manini that he has vomited out the medicine that they have given to him on Devraj’s instructions.

Meanwhile, Devraj is eagerly waiting for Banni to get the report that will prove Manini’s guilt.

Elsewhere, Banni gives the report to Vishnu to give to Devraj so that he can prove Manini’s guilt.

In the meantime, Manini calls Raja to ask about Banni who tells her that Banni is busy saving her customers.

Manini tells Viraj that Banni and Devraj know about the pills that they were giving to Yuvaan and have carried out a blood test to establish proof against Manini.

Meanwhile, Banni gets an anonymous letter with garlands implying her business is dead.

Yuvaan asks for Banni after coming down but Viraaj’s threatening eyes stop him as he has threatened to beat Banni with the hockey stick.

Devraj goes to find Banni but Manini tells him that he will have to sit with Yuvaan in the veneration.

Manini instructs Viraj to not let Banni and Devraj communicate while she will make sure that Devraj does not leave his place.

Just then Vishnu calls on Devraj’s phone and asks him to come out.

Seeing Viraj, Vishnu hides the report and tells him that he has come for money.

Viraj instructs the guard to not let Banni and Vishnu come inside.

Seeing Niyati, Yuvaan asks Devraj if Banni will come and he tells him to call Banni from his heart and she will definitely come.

Just then Banni gets the news that few people have poison in their tiffin while few do not.

Meanwhile, Pandit asks the bride and groom to put Warmala on each other.

Later, Banni recalls Yuvaan’s advice to be calm and finds the solution to her problem.

On the other side, Manini hands over the Warmala to Yuvaan whereas Vishnu comes to Banni and informs about Viraj’s attempt to stop him.

Banni tells Vishnu that they will go to an old-age home first and then to Yuvaan to save him from marriage.