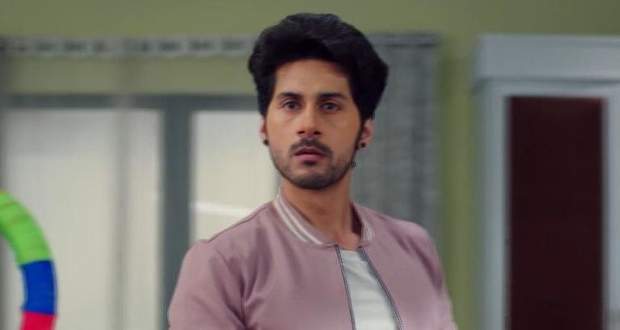 Today's Banni Chow Home Delivery 20th June 2022 episode starts with Yuvan cryingly telling Viraj that he will only give the phone to Banni.

Hearing this, Viraj starts beating him for the phone despite Banni’s pleading.

At first, Banni throws fruits at Viraj to stop him but when that trick does not work, she performs a pole vault and enters the Rathod mansion.

She then yanks Viraj away from Yuvan and the whole family looks stunned.

However, Viraj being over-confident starts flexing his phone cover without even noticing it.

Giving the real phone to Banni, Yuvan hugs her tight and asks her not to leave him again.

While Niyati and Anchal take Yuvan inside, Viraj notices Banni’s staring and tries to take his phone from Banni’s grip.

Seeing this, Banni attacks Viraj, and after teaching him a lesson, she announces to the whole Rathod family that she will show them the proof.

Later she exposes Viraj and the goons chatting in front of everyone while Manini and Viraj just stand there silently.

However, to prove herself innocent, Manini slaps Viraj hard.

When Debraj asks Viraj the reason behind his evil act, Viraj snaps and tells everyone that he hates Banni and cannot tolerate her in the house.

Hearing this, furious Banni asks him why he cannot see Yuvan’s suffering like her.

Instead of repenting, Viraj furiously says that the only reason he does not like Yuvan is that Debraj has given him property.

Bindra also joins Debraj and announces that if Debraj gives Viraj any money he will just waste it.

At the same time, Yuvan also confesses that Viraj has beaten him and forced him so he cannot speak the truth.

This revelation makes Debraj so angry and he announces to everyone that he is giving Banni the right to scold anyone who misbehaves with Yuvan.

On one hand, Banni is happy with this and on the other hand, Manini just burns with anger.

She then asks Viraj to ask for forgiveness for her mother’s portrait.

At the same time, Banni also asks Manini to ask for her mom’s forgiveness as she has also thrown mud at Banni’s mom’s character.

© Copyright tellybest.com, 2022, 2023. All Rights Reserved. Unauthorized use and/or duplication of any material from tellybest.com without written permission is strictly prohibited.
Cached Saved on: Monday 21st of November 2022 03:10:04 PMCached Disp on: Monday 5th of December 2022 01:21:48 PM