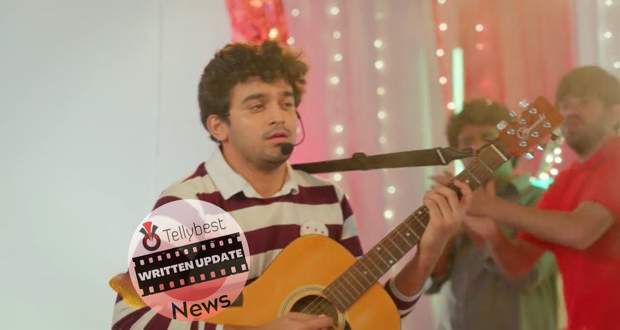 Today's Banni Chow Home Delivery 20th September 2022 episode starts with Yuvaan singing in the concert while Agastaya becomes curious about the singer and feels impressed to hear him sing.

Everyone present praises the voice while Agastaya calls him to light saying he deserves to get part in the reality show.

Yuvaan comes out in front of Agastya which shocks him.

After the performance, everyone cheers for Yuvaan while Banni comes out to ask Agastya to fulfil his promise.

Agastya gets angry for being manipulated but keeps his cool.

He tells Yuvaan that besides the talent, there are other things needed to be a rockstar like style, swag and personality that helps them face certain hard questions as well.

However, Yuvaan tells Agastya that Banni will solve all his problems.

Just then Myra also arrives at the scene and begins to record Agastya.

Meanwhile, Agastya makes fun of Banni and calls her a rockstar and tells her to not make him insult Yuvaan more.

Banni gets agitated and reminds Agastaya of his promise while Agastya tells her that Yuvaan cannot become a rockstar because he is dependent on her.

Agastya also tells her that he loves breaking promises and tells her to go as the show is over.

In the meantime, Viraj apologises to Charmi for Manini’s poor behaviour and tells her that he is only supporting Manini because she has promised to give him a share in the property which his own grandfather denied him.

Charmi remains quiet and thinks that Manini is only using them as a pawn while Banni is the one who is the same from the inside out.

Meanwhile, Banni is worrying about Yuvaan not making it to the audition.

Just then Myra comes in and shows the video she has uploaded against Agastya and tells her that will pressurise Agastaya into letting Yuvaan in.

On the other hand, Agastya also sees the Video being Viral and gets angry.

The next morning, everyone is wondering about Manini’s lack of reaction at the Yuvaan’s audition and the video while Viraj tells them that Manini does not know it yet.

Just then Banni also comes with her bags and is equally surprised to see Manini absent.

Charmi tells her that Manini has gone to Delhi on a very important business.

Meanwhile, Manini is telling the doctor that she is on her way and asks him to prepare for surgery for her brother.

Elsewhere, Myra comes to Banni to show how popular her video has become and a movement against Agastya is trending on social media.

Agastya becomes angry to see himself being trolled on social media.

© Copyright tellybest.com, 2020, 2021. All Rights Reserved. Unauthorized use and/or duplication of any material from tellybest.com without written permission is strictly prohibited.
Cached Saved on: Friday 30th of September 2022 10:55:54 PMCached Disp on: Saturday 1st of October 2022 12:08:35 AM