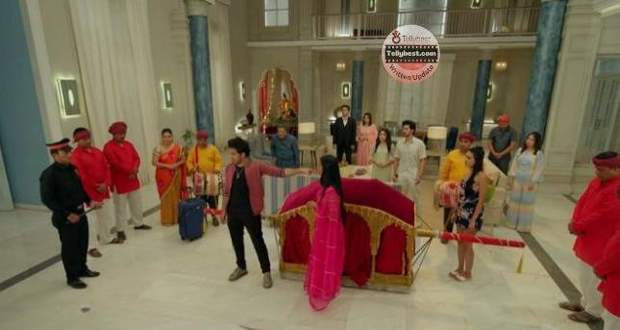 Today's Banni Chow Home Delivery 21st December 2022 episode starts with Charmie telling Banni that she is very afraid of Kabir and does not know how to handle him at home.

However, Banni reminds her that fear means defeat as she turns around and starts putting on Kajal.

Charmie asks her why she is getting ready and Banni says that once she forges her place in Kabir's heart, he will have to accept Kanha.

Meanwhile, Devraj gets pained to see Kabir who plays his violin, in remembrance of Tulika.

Banni finally gets ready and puts on black goggles as Charmie holds Kanha in her arms.

Charmie asks whether Banni is going to make her entry back into Rathod House in a palki and Banni smiles and says yes.

Even though it is old-style, Banni jumps inside the palki with Kanha in her arms.

He gets angry and then jokingly asks Viraj if he has married twice.

However, Banni jumps out of the Palki, making Kabir angry, who asks her if she is not scared of being hurt.

Banni's smile remains constant as she addresses Kabir as her "swami" making Devraj smile and says Kabir resides in her heart.

Kabir shouts & twists his head and reminding Banni that only Tulika remains in his heart while Banni says underneath this Kabir, her Yuvan is only there.

Kabir tries to throw Banni out of the house, when suddenly, lawyers and several police officers come into the Rathod Mansion, and tells Kabir that Banni is fifty percent partner of this house and Rathod business.

Kabir's anger fades away as he gets stunned to further speak when the lawyer shows him the papers signed by Yuvan.

In a flashback, Banni and Yuvan are seen cuddling near the bonfire when Yuvan makes Banni promise that anytime, Kabir makes an appearance and overpowers her, she has to make Yuvan come to life with her pure life.

Yuvan then proceeds to give the papers, stating that Banni will be his 50 percent partner.

The flashback ends as Banni asks Kabir to give his blessings to her for being a dutiful wife.

However, as Kabir backs off and Banni bends down, she pinches his feet which makes him drop his hand on her head involuntarily.

Later, Alpana speaks in between and says Banni's true colors are spilling out, however, Banni savagely replies that she was always like this.

Now that Kabir is an upgraded, intelligent version of Yuvan, she will relax back.

Banni asks the palki holding people to drop off her luggage in Kabir's room but Kabir reminds Banni that he hates her and she might be this house's fifty percent partner but not of his room's.

Kabir then says he will check everything that she has brought with her inside this palki and Alpana agrees, making Banni stiffen.

© Copyright tellybest.com, 2022, 2023. All Rights Reserved. Unauthorized use and/or duplication of any material from tellybest.com without written permission is strictly prohibited.
Cached Saved on: Wednesday 25th of January 2023 07:20:11 PMCached Disp on: Monday 6th of February 2023 05:14:28 AM