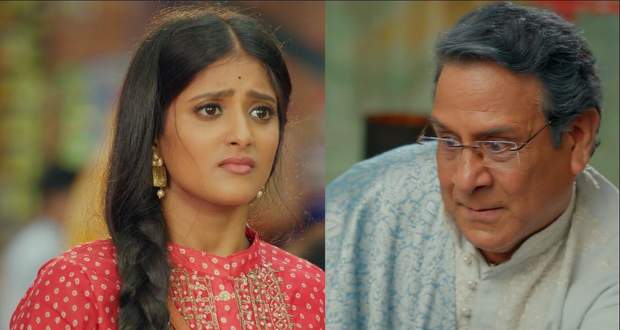 He tells the pandit that he likes him more than “Gandi pari” which generates laughter among everyone.

Hemant tries to change Yuvan’s mind but Yuvan asks if he can put the jaymala on his neck.

Before he can continue his nonsense, Viraj looks at him with the hockey stick.

Elsewhere in an old-age home, Vishnu and Banni frantically search the tiffins to find the poison in them.

After finding the poisoned tiffins, Banni orders everyone not to eat any food.

When Vishnu asks her how she knew, Banni reveals that the one photo Raja sent was of this home as she could notice the carvings.

Hearing this, Vishnu praises Banni for her quick thinking and they come out of the old-age home quickly.

One outside, they are approached by Raja and his goons and Raja urges her to stay with him.

Banni just smiles and tells Raja that today he will become a dog for her.

On the other hand, Charmi explains to everyone about the marriage rituals.

Yuvan tries to tell Hemant that he will marry Banni but he ignores him.

Seeing Yuvan and Niyati’s marriage rituals, worried Devraj decides to stop the marriage on his own.

Before he can say anything, Banni enters Rathod’s mansion like a superwoman while dragging Raja behind her scooter like a dog.

She then shows everyone Yuvan’s true blood report and accuses Manini of drugging Yuvan.

Instead of listening, Hemant accuses Banni of ruining Yuvan’s marriage along with Devraj.

A flashback shows, how Manini has confessed everything to Hemant beforehand with a slight twist.

She has accused Banni of drugging Yuvan.

Back in reality, Hemant accuses Banni of drugging Yuvan much to her shock.

He even asks Devraj how he can trust someone more than his son.

© Copyright tellybest.com, 2022, 2023. All Rights Reserved. Unauthorized use and/or duplication of any material from tellybest.com without written permission is strictly prohibited.
Cached Saved on: Monday 21st of November 2022 05:13:22 AMCached Disp on: Thursday 1st of December 2022 11:09:14 PM