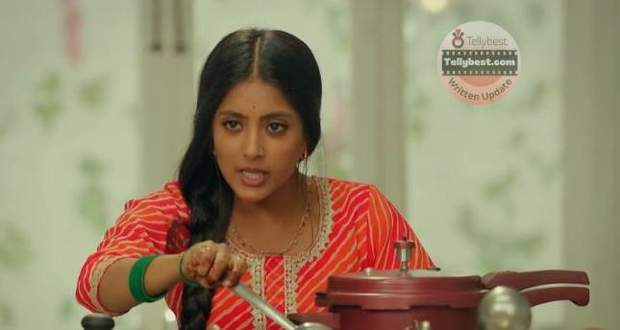 Today's Banni Chow Home Delivery 21st November 2022 episode starts with Kabir walking away from Banni while yelling that he knew Banni was doing it on purpose.

After figuring out Banni must have learned about someone alerting Kabir through text, Kabir praises Banni for her smartness.

Afterward, they both start feeling dizzy and Banni starts chasing Kabir who runs away into the hall.

During the chase, Banni and Kabir both enter a room and Kabir tries to escape but the room is locked.

Standing up, Kabir starts seeing double Banni but when he mentions this to Banni, Banni announces if he does not give her the phone, he will see four Banni.

During their struggle for the phone, they both end up falling onto the bed, and while Banni tries to take the phone, Kabir pushes Banni away.

He then questions Banni why she married Yuvan to which Banni replies that she fell in love with Yuvan’s innocence.

With a low whisper, Kabir adds that whenever Banni comes close to him, Yuvan tries to come out.

Later when Kabir starts smiling softly, Banni comes on top of him to grab the phone but being smart, Kabir moves Banni aside.

Afterward, sleepy Banni urges Kabir to spill the name of who is helping him when she notices her locket is stuck in Kabir’s shirt.

While unlocking the locket, Kabir jokes that maybe a ghost, God, or a stranger is helping him which stuns Banni.

With a grin, Kabir stands up even though he is stumbling on his feet due to the sleeping drugs, and Banni also stands up.

After coming close to Kabir, Banni questions in a low voice if he does not remember his Banni Chow anymore while Kabir looks away.

Once Banni is done, a soft grin spreads across Kabir’s face indicating Yuvan is back and he embraces Banni in a hug.

Feeling Yuvan’s presence, Banni tightens the hug and they start circling while a white curtain surrounds them.

Once the moment is passed, Banni realizes Kabir has fallen unconscious and she quickly grabs his phone.

However, while Banni is checking the phone, Kabir struggles to take the phone away.

Later, in the hall, after slapping Kabir, Viraj makes sure to throw Kabir on the bed and locks the door.

Meanwhile, Banni dumps a whole jug of water on her head to stay awake and Viraj shows Banni the SMS in which the number is not visible.

Later, when Agasthya also fails to track the phone, Banni decides to do something drastic.

On the other hand, after waking up, Kabir starts looking around for Tulika but finds his soft toy scattered.