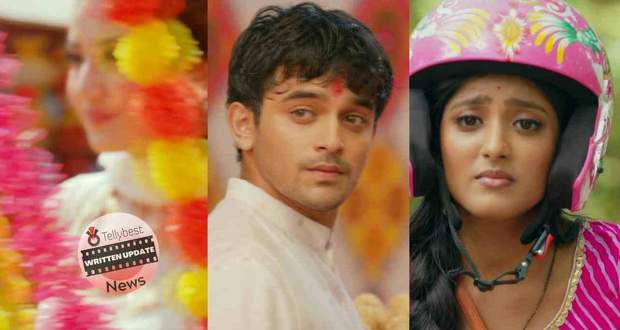 Today's Banni Chow Home Delivery 21st October 2022 episode starts with Banni stopping Debraj and telling him that he will not tell Yuvan about her being Yuvan's wife.

Yuvan's father tells Banni that he is shocked by her statement and tells her to leave and never come back.

However, Banni gets on her scooter and barges in through the gates.

Further, she tells Hemant that she will make sure Yuvan recalls how much he loved her and will leave if Yuvan fails to remember her after her efforts.

Banni states that her marriage with Yuvan was not forced but that their heart had been attached.

Later, Yuvan is getting his pooja done while the family introduces themselves to her.

Yuvan recalls Viraj and praises Charmi's beauty while being informed that she is pregnant and that he will be an uncle soon.

Yuvan notices Banni from the corner of his eyes and asks her who she is while she introduces herself once again.

Seeing Banni introduces herself in her special way, Debraj smiles while Banni states that she and Yuvan had a strong connection as she used to cook for him and feed him.

Banni excitedly agrees and is about to go toward the kitchen when she slips.

However, Yuvan saves her and smiles at her as she goes while stating that Banni is different.

Further, Banni is cooking while Charmi teases her and tells her that she has forgotten to make Yuvan's special Kheer.

Banni states that she doesn't know what's happening to her while Charmi tells her that these are the signs of falling in love.

Afterward, Banni is setting the dinner in the dining hall while Yuvan comes there and says that he's impressed.

Meanwhile, Banni gets shy when Yuvan sweetly tells her that he wants to eat with her before anyone else comes.

Banni gets happy and is about to serve him when he holds her hand and makes her sit.

However, before he takes a bite, he looks at Banni and tells her that he recalls her saying she used to feed him with her own hands.

Banni looks down feeling flustered while Yuvan tells her that he doesn't remember it but wants her to feed him.

As Banni feeds him, Yuvan flirtingly smiles at her making Banni's heart skip a beat.

Yuvan praises Banni and tells her to make the food a little spicier from now on as he's not a child anymore.

Banni runs to the kitchen making an excuse and releases the breath she has been holding saying that Yuvan cannot forget her.

© Copyright tellybest.com, 2022, 2023. All Rights Reserved. Unauthorized use and/or duplication of any material from tellybest.com without written permission is strictly prohibited.
Cached Saved on: Monday 21st of November 2022 09:33:59 AMCached Disp on: Thursday 1st of December 2022 03:07:38 AM