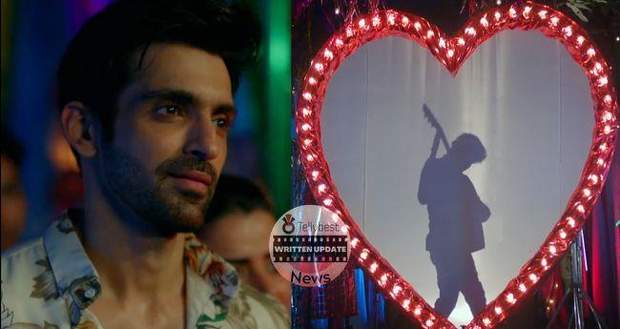 Hearing the accusations, Agastya gets furious and gets ready for the studio.

At the same time, Agastya gets a call from his manager to not come to the studio as investors are backing out because of protests.

Furious Agastya throws his mobile phone on the wall.

On the other hand, people throw stones inside the studio and Agastya's employees call him crazy for coming to the studio in this environment.

In Rathore mansion, Banni, Yuvan, Myra and Devraj are watching the news with enthusiasm as there's a chance for Yuvan to participate in the show again.

Meanwhile, Yuvan gets happy seeing his picture on the T.V. and thanks Banni and Myra for his fame.

Outside the studio, Agastya gets out of the car fearlessly but people throw pebbles at his face.

Afterwards, Agastya climbs onto the car and reveals that Yuvan cannot handle every situation if he becomes a rockstar and he can get a panic attack anytime and refuse to sing.

Hearing Agastya's words, the people scream at him to apologise to Yuvan for insulting him.

People accuse Agastya of being a spoiled brat of a wealthy family.

At the same time, the producer of the show Param Kapoor (Agastya’s Father) reaches outside the studio.

Param Kapoor apologises to the audience and declares that Yuvan is selected for the show while Agastya is removed as the judge of the show.

In Yuvan’s room, everyone gets happy and Banni falls to her knees due to happiness and relief.

Yuvan starts to dance and Devraj watches him with tears of happiness.

In the studio, Agastya gets shocked hearing his father’s words.

On the other hand, Manini sees the video and finds out about Yuvan’s career and calls Viraj furiously and tells him to keep an eye on them until she comes back from Delhi.

Manini accuses Devraj of making his grandchild a rockstar while her brother’s health is fighting for his life.

Later on, Yuvan goes to the market with Banni and sees an old couple selling Gajra and goes to buy it.

However, after seeing Banni the couple refuses to sell Gajra and accuses Banni of insulting a good human being.

Banni doesn't understand so they tell her about Agastya's act of kindness by selling their balloons on the day of the audition.

© Copyright tellybest.com, 2020, 2021. All Rights Reserved. Unauthorized use and/or duplication of any material from tellybest.com without written permission is strictly prohibited.
Cached Saved on: Friday 30th of September 2022 10:07:21 PMCached Disp on: Saturday 1st of October 2022 12:21:31 AM