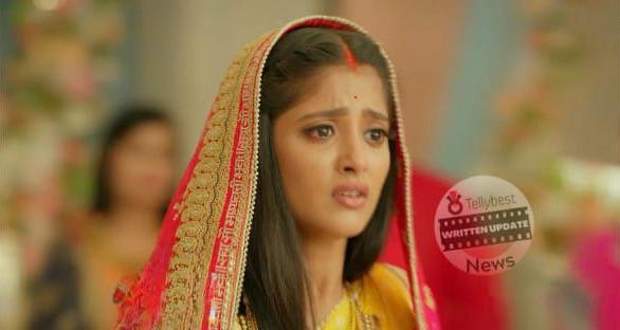 In the room, Alpana instigates Yuvan against Banni as the reason for his mother’s anger.

When Viraj is apologising, Yuvan comes angrily and starts to remove Banni’s bangle, and chain and pulls gajra while Banni holds her hair and neck with a grimace on her face.

Devraj tries to console Yuvan but he doesn’t hear and continues to do his frantic banter of blaming Banni.

Yuvan blames Banni for not wearing his mother’s clothes and jewellery and making his already angry mother angrier.

Agitated Yuvan tries to run toward Banni but Devraj stops him as he is afraid Yuvan will hurt her.

Devraj takes Yuvan to his room and tries to console him by hugging him and assuring him that his mother is not angry.

Meanwhile, Yuvan shows Devraj the tape in which he heard her singing and requests his mother to sing again.

Viraj and Charmie are holding tape that they used to puzzle Yuvan.

Later, Banni is standing in front of Hemant and requests him to help Yuvan as he is the only one who can handle him in his blurry mental state.

Hearing about Yuvan, Hemant frantically asks Banni what happened to him.

Banni tells Hemant about Yuvan breaking her bangles due to the trauma of breaking his mother’s promise.

Later on, Hemant consoles Yuvan with his fatherly affection while Devraj and Banni get emotional seeing the father-son duo.

Viraj asks Manini about her next plan of making Banni run miles from Yuvan but Manini doesn’t tell them anything and orders them to get out.

Meanwhile, Yuvan plays the violin and recalls his childhood memory of his mother running into his room forgiving him for his wrongdoings.

Banni accuses Devraj of not telling her the truth (of Yuvan thinking that he has broken his mother's promise) and shows her gratitude to Hemant with folded hands.

Yuvan runs out and hugs Devraj while Manni gets shocked watching her plans going wrong.

© Copyright tellybest.com, 2020, 2021. All Rights Reserved. Unauthorized use and/or duplication of any material from tellybest.com without written permission is strictly prohibited.
Cached Saved on: Saturday 1st of October 2022 10:59:47 PM