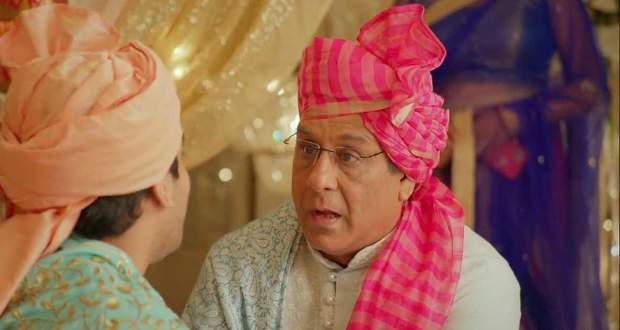 Today's Banni Chow Home Delivery 22nd July 2022 episode starts with Banni telling Hemant that his wife is the one who has been administering drugs to him.

Veer accuses Banni of adding drugs to Yuvaan's food and tells her it is the only reason why Yuvaan use to be happy with her.

Alpana also agrees with Veer and sympathises with Manini who is paying the price for being a stepmother.

Veer also tells Banni that it is due to Manini that Banni is not in jail because she has asked Hemant not to call the police.

Banni calls them all Manini’s disciples and shames them for ignoring the obvious.

Banni challenges everyone to get her food tested as well as Yuvaan’s blood to prove who has been giving drugs to Yuvan.

Devraj also agrees with Banni and asks for the blood test to be conducted right this minute.

Hemant tells Banni that all this drama can be put aside until Yuvaan’s marriage while Banni tells him that marriage can take place anytime but this is the matter of life and death for Yuvaan.

Yuvaan feels happy at Manini’s suggestion to marry Banni and goes to put sindoor and Warmala on Banni and declares themselves married.

Everyone including Banni is shocked at Yuvaan’s doing while Hemant scolds Yuvaan for putting sindoor on Banni’s forehead.

Manini stops Hemant from hitting Yuvaaan and tells him that she has asked Yuvaan to marry Banni.

Later, Manini takes Banni and Yuvaan to Mandap and asks Pandit Ji to get them married.

Banni opposes Manini’s decision of marrying Yuvaan but Manini challenges her to take full responsibility for Yuvaan if she is such a nice friend to Yuvaan for she is not ready to be blamed again and again for being a stepmother to Yuvaan who tortures him.

Manini also asks Devraj to give his blessings for Yuvaan and Banni’s marriage if he thinks Banni is a better choice for him.

Later, Manini gives Banni two choices either marry Yuvaan and come live in his house and take full responsibility for him or leave their lives forever.

Manini asks Banni to tell her decision right now as they are tired of her daily dramas.

Yuvaan tells Banni to finish getting married to each other while Banni looks at him in shock.