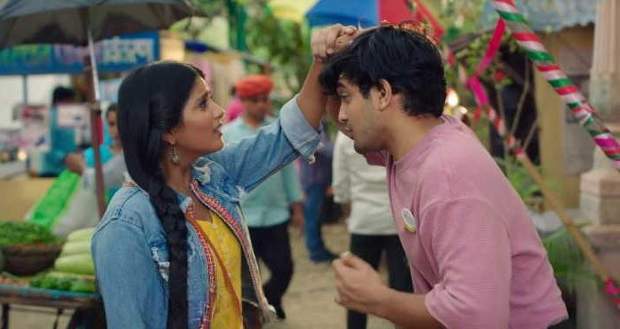 Today's Banni Chow Home Delivery 22nd June 2022 episode starts with Yuvan frantically asking Hemant if he can take Banni with him to Delhi.

During the chaos, Yuvan holds Banni’s hand so he can stay but Hemant drags Yuvan to the car.

While Manini is worried thinking that Debraj may not stop them, Banni runs to the living room to talk to Debraj.

She then asks Debraj why he has not told her about it beforehand.

She even says that Debraj will not be able to live without Yuvan and pleads with him to stop Yuvan from leaving.

Hearing Banni’s pleading, something inside Debraj clicks and he runs outside to stop Hemant.

He stands in front of the car and announces that he will not object to Yuvan and Niyati’s marriage.

When Hemant tells Debraj that he cannot stay here anymore as Debraj soon or later will oppose again, Manini says Debraj has now understood that Niyati is perfect for Yuvan.

She even announces that in two days they will do the engagement.

Hearing this, Debraj just looks at Manini with venom while Yuvan runs to hug Debraj.

Later in the night, Banni confesses to Vishnu that seeing Yuvan leaving like this, she has realized how important Yuvan has become an important part of her life.

Elsewhere, Yuvan tells Debraj that he does not want to marry Niyati the Gandi Pari as he does not like her.

Hearing this, Debraj is also worried about how he will stop Yuvan’s marriage.

Meanwhile, Manini and Niyati discuss their deal, and Manini advises Niyati to focus on Yuvan and Debraj’s heart winning.

At the same time, Viraj also arrives there and tells Manini that he will calm down once he gets revenge on Banni.

The next morning, seeing Banni in the Rathod mansion Niyati expresses her worries about Banni getting close to Yuvan.

Meanwhile, in Yuvan’s room, Yuvan asks Banni to wear his mom’s payal to dance for him.

At first, Banni tries to deny but after Yuvan’s persuasion, she agrees to dance.

At the same time, Manini announces to Niayti that she has a plan to make Banni leave Yuvan’s life forever.

© Copyright tellybest.com, 2022, 2023. All Rights Reserved. Unauthorized use and/or duplication of any material from tellybest.com without written permission is strictly prohibited.
Cached Saved on: Tuesday 22nd of November 2022 08:49:34 PMCached Disp on: Monday 5th of December 2022 01:41:32 PM