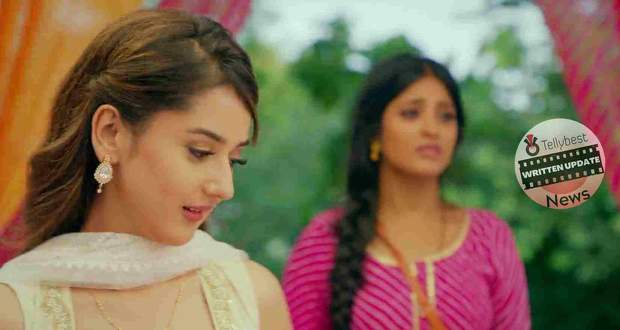 Hemant confronts Veer for drinking too much but he accuses him of spitting him out like chewing gum.

He asks about Hemant Yuvan's credibility but he calls them (Veer and Viraj) Manini’s puppets.

However, Veer tells that Viraj has taken training from Viraj but Hemant calls him Manini’s puppet.

Hemant and Veer start to banter while Yuvan tries to stop them.

Frustrated Veer slaps Yuvan tightly and everyone gets shocked.

Yuvan tells everyone that Veer is right and tells Hemant that he will work under Viraj to learn everything then he will become CEO.

Hearing Yuvan’s wise talk, Viraj hugs Yuvan and tells him that they will work together.

Yuvan hugs Veer and smiles menacingly behind everyone's back.

At night, Banni is standing in the garden and touches her shoulder and asks her how he can forget her.

Yuvan and Banni dance romantically on the song “Raabta” and he holds her in his arms lovingly.

Both move on the beat while Banni blushes and thinks her old Yuvan is back.

However, Charmie holds Banni in her arms when her head gets dizzy due to twirling continuously.

Charmie sneezes and Banni takes her inside and goes to get warm milk from them.

However, Banni feels a foreign presence behind her but sees nothing.

In the living room, Veer comes to take his phone while the lights get off and Yuvan follows him.

Veer is walking towards his room half drunk and feels a presence and gets scared.

In the kitchen, Charmie asks Yuvan about Banni not getting worried about him forgetting her forever but she praises his kind heart.

In the corridor, Yuvan slaps Veer's face 6-8 times on his right cheek and Veer falls on the floor while asking who's there.

Meanwhile, Banni finds Yuvan missing from his room but he comes out of the bathroom.

Banni offers him milk and Yuvan asks her what is she doing in his house at midnight.

She tells him that Devraj asked her to stay for some days while he sneezes.

Banni picks up the towel and starts drying his wet hair while scolding him for not taking care of him.

Yuvan holds her hands and says she cares for him so much and Banni blushes.

At the same time, Veer comes with his wife and confronts Banni for slapping him.

However, Yuvan defends Banni as she was with him but he does not listen.

When Veer goes back to his room, Banni sees an injury on Yuvan’s left hand and puts cream on it lovingly.

Yuvan looks at Banni with sparkly eyes while she gets suspicious of him.

© Copyright tellybest.com, 2022, 2023. All Rights Reserved. Unauthorized use and/or duplication of any material from tellybest.com without written permission is strictly prohibited.
Cached Saved on: Monday 21st of November 2022 09:45:48 AMCached Disp on: Thursday 1st of December 2022 01:20:03 PM