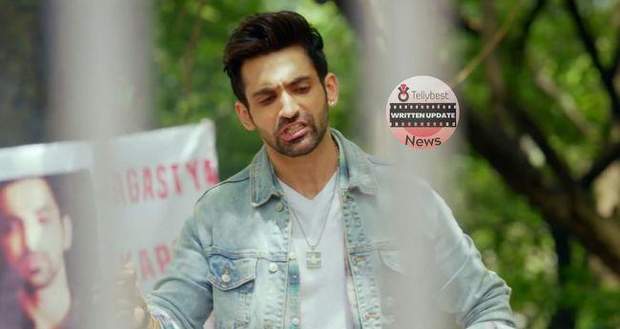 Banni says that she does not think Agastya might be good while Yuvan explains to her that Agastya has also been wrong and that his decision was not wrong.

Yuvan requests Banni to make Agastya the judge of the singing competition once again and she agrees.

Just then, Banni gets a call from Priya from Singing Rockstar and requests them to come to the studio right now to complete some of the formalities.

Elsewhere, Agastya paces near the pond as he recalls all the insults Param threw at him and made him feel as if Agastya is made famous by him only.

Back at the studio, Banni and Yuvan ask Priya if she can do something that will make Agastya the judge again but she says that it is not in her hands now.

They spot Rohan and request him to take them to Agastya and he agrees.

Later, Rohan brings Yuvan and Banni to the pond but tells them that they should not disturb him as he's very inflicted right now.

Yuvan says that Agastya will not be sad if he makes Banni his friend and later tells Rohan to make a video of their apology and show it to Agastya later.

Afterward, Agastya keeps listening to Banni's apology and leaves telling Rohan that he has something important work to do.

The next day, the preparations for Yuvan's promo shoot are being done when Agastya comes there shocking everyone.

The management hopes that Agastya does not create any drama while Agastya takes a bouquet and gives it to Banni while she asks him if he accepted the apology.

Agastya greets the whole family while Priya asks Agastya what he's doing there.

Agastya mocks Priya and tells her that even though he is not a judge, he is still part of the show and came to meet the special contestant.

Rohan overheads talking ill about Yuvan and smiles while Agastya goes after Banni.

Agastya sees Banni giving medicines to Yuvan and putting them back in their place.