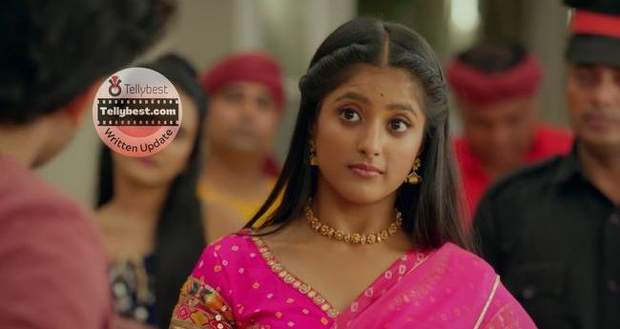 Today's Banni Chow Home Delivery 23rd December 2022 episode starts with Charmi and Viraj crying at the fate of their child.

Viraj consoles Charmi while Banni picks up Shrey and encourages Charmie to not lose faith.

Charmi reveals that she cannot become a mother again and blames god for giving her a child-like Shrey.

Banni encourages Charmi but she cries and blames herself for breaking everyone’s last hope.

Devraj feels delighted but Kabir makes excuses that Yuvan likes the child and that he will send the child abroad after his treatment.

In Charmi’s room, Banni gives Charmi encouragement by giving her examples of different legends who became successful despite being physically able.

However, she exclaims that she does not have strong willpower like Banni.

Charmi requests Banni to give her Kanha so that at least her one child will be healthy.

Banni looks at her shocked and refuses but Charmi begs her.

Charmie states that she and Virat will love Kahna and gives the reality check to Banni that Tulika is dead and Kabir hates her.

Banni gets infuriated at Charmi’s words and announces that she will get Kanha Kabir’s love as she promised Tulika on her deathbed.

Charmi gives Banni 10 days to prove that Kabir loves Kahna else she will keep the baby.

Banni agrees when Charmi blackmails her that she will tell Kabir the truth that Kanha is alive.

The next morning, Banni gets a parcel and gives a huge smile stating that Kabir needs to spend a whole day with her and Kanha.

In the house, Kabir informs everyone that some important clients are coming to their house and orders the servant to make some international cuisine.

Later, Banni puts handcuffs on her and Kabir’s hands when Kabir was talking on his phone.

Kabir aggressively asks Banni to open the handcuffs but she throws the key away.

At the same time, the clients come out of the car and Kabir hides his handcuffed hands behind their backs.

However, Banni greets the investors and shows the handcuffs and embarrasses Kabir.

Banni explains to the investors that they do not get enough time together so they use handcuffs to spend time.

Banni fools the investors by calling the handcuffs a tradition and they call Kabir a romantic man and get impressed by him.

Banni requests Kabir to go with her while Virat and Alpana handle the clients.

Kabir orders her to go alone but she shows him their handcuffed hands.