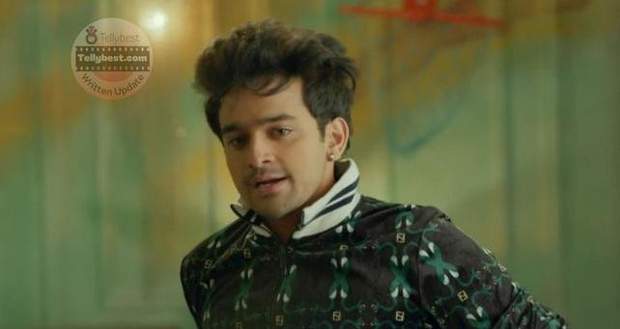 Today's Banni Chow Home Delivery 23rd November 2022 episode starts with everyone waking up shocked that they didn’t die from the bullet shots.

Meanwhile, Yuvan is shocked to see everyone alive and asks Banni if the gun is broken.

He laughs psychotically and recalls eavesdropping on Banni and Viraj’s conversation in which Banni accepts she damaged Tulika’s accessories to trigger Kabir.

She wants Kabir to blurt out the culprit’s name who gave Yuvan the pills that made him go mad.

The flashback ends, Kabir pulls out a real bullet and loads it in the gun and puts the gun on Banni’s head.

He bashes her for thinking of him as a fool and declares that her plan failed again.

However, Baani stops Devraj and urges Kabir to pull the gun’s trigger and he looks at her with confusion.

Banni smirkingly tells Kabir that she is sure that Manini is not the real culprit.

However, Kabir screams in her face that he will never die as he has kept the culprit safe.

Baani drags the gun on her forehead and tells him to pull the trigger but he removes the gun.

Kabir states he has promised Tulika that he will not harm Banni and also tells everyone that he will marry Tulika tomorrow.

However, Banni challenges Kabir that she will see how he will marry her while Kabir exclaims that he will kill Yuvan tomorrow.

After Kabir leaves, the Rathore family is standing scared but Baani promises everyone that she will rescue Yuvan anyhow.

At night, Kabir decides to do something to make sure Banni’s slaves (Veer and Viraj) do not interrupt his and Tulika’s marriage.

Later, Kabir calls Tulika and asks her to not come home today and lies he wants to perform a ritual.

Tulika cuts the call and recalls Banni's request for help.

Tulika is afraid that Kabir might hurt Yuvan if he gets to know that Banni knows the truth.

At Rathore's house, Banni and Viraj are discussing the potential culprits but Devraj interrupts them.

He informs Banni that they need to send Kabir to a mental health hospital.

Devraj declares that if Banni is able to rescue Yuvan then she can live with him and if Yuvan dies, Kabir will be sent to a mental health hospital.

He also orders Banni that she will marry Agastya in the same mandap if Baani loses Yuvan.

However, Banni exclaims that she will marry Yuvan tomorrow and Devraj himself will get them married again.

On the other hand, Kabir opens a trunk in which a ghost mask and black cape are kept.

Later, Kabir dresses in the ghost costume and descends the stairs while striking the sword between the railing gaps.

Kabir enters Charmie and Viraj’s room and slams the sword on the bed.

However, the bed is empty and Banni recalls seeing Yuvan on the stairs.

In Banni’s home, Banni locks the door and asks Veer and Viraj to spend a night there to remain safe from Kabir.

On other hand, Kabir gets infuriated when no one knows where Veer and Viraj are.

© Copyright tellybest.com, 2022, 2023. All Rights Reserved. Unauthorized use and/or duplication of any material from tellybest.com without written permission is strictly prohibited.
Cached Saved on: Wednesday 23rd of November 2022 11:37:40 PMCached Disp on: Thursday 1st of December 2022 01:37:45 AM