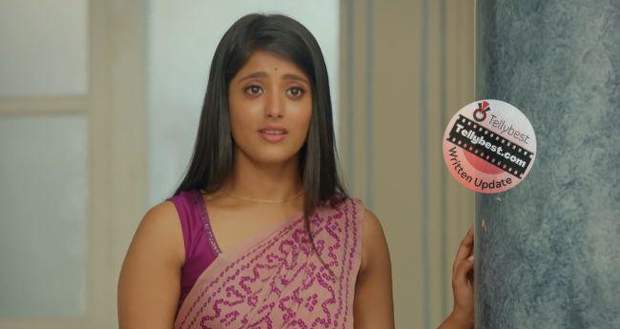 While Banni utters the names of the dishes, Kabir just gives a death glare.

Kabir gets stunned to hear Banni announcing her husband Kabir will help her to cook and orders the servant to walk away.

Kabir’s eyes get teary during the onion cutting and Banni wipes off his tears lovingly just like she used to do with Yuvan.

They then both cook the food together despite their difference like a loving husband and wife.

Later, once Banni serves the food to the guests, she announces she deserves compliments, and the investors nod.

Looking at Kabir, Banni urges Kabir to give her a kiss on her hand who looks at Banni with anger but when the investors also agree with Banni, Kabir kisses Banni’s hand reluctantly.

Kalpana then whispers to Kabir about her presentation and how the investors have approached another company for the same project.

Kalpana further informs Kabir that the investors will choose after comparing both projects so Kabir should take over from here.

After Kalpana walks away, Kabir looks tensed and Banni starts telling the investors her and Kabir’s love story.

Kabir gets so much interested in the story as when Banni pauses for some time, Kabir questions her about what happened after that.

Locking her hand with Kabir, Banni looks at him with love in her eyes and Kabir is also not able to avert his eyes.

When Banni tells Kabir that after the storm they live together, a soft smile appears on his face.

The spell breaks as the investors start clapping for Banni and Kabir starts frowning but the investors promise to give Kabir the deal.

Once the investors walk away, Banni urges Kabir to give her a gift who breaks the handcuff with a hammer and informs Banni that he will not keep Banni’s favor much longer in a cold voice.

Banni then gets a call from Vishnu and runs out of the Rathod mansion when she learns about the fire.

Later, Banni gets shocked to see the whole Basti on fire and Vishnu cryingly tells Banni that their home is burnt.

However, Banni enters the home despite Vishnu’s warning to save the portrait of her and Yuvan.

Once entering the home, Banni’s feet stay rooted as the memories reflect in front of her eyes but Vishnu rescues her.

Later, while Banni is recalling how Yuvan made her sit for the painting, Kabir arrives there and tells Banni creepyly that these people are suffering because of her.