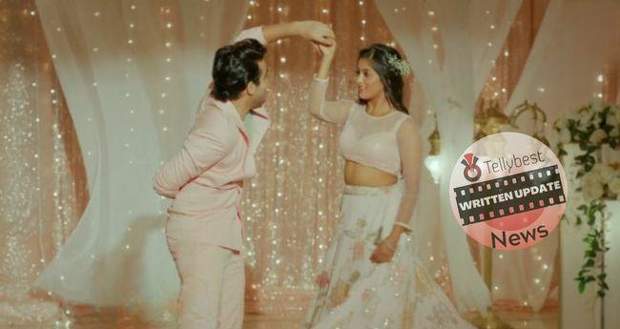 Today's Banni Chow Home Delivery 24th September 2022 episode starts with Agastya getting agitated as he sees Banni and Yuvan dance gracefully and giving a good shot to the director.

Everyone claps for the couple as the promo are done while someone accidentally bumps into Rohan and the bottle of pills falls from his hand landing near Banni.

Agastya comes forward and throws his handkerchief on top of the pills while Banni also turns at the same time.

Banni tells him that she understands now what he said by Yuvan not being able to become a rockstar immediately.

Banni requests Agastya to become Yuvan's mentor and he agreed after which he tells Yuvan to prepare a song for the first round.

Yuvan starts thanking Agastya for being so nice while Agastya laughs and leaves from there.

Afterward, Rohan asks Agastya why he agreed to be Yuvan's mentor and Agastya reveals that he did it for the future as it might be helpful in the future.

The next morning, Yuvan is deciding on which song to select for the first round and practices while Agastya tells Rohan that Yuvan won't be able to perform without his pills.

On the other hand, Manini returns home and Banni starts taunting her saying that Yuvan's dreams are coming true.

At the same time, Viraj has put Yuvan's violin on top of the cupboard and is hiding behind it.

When Yuvan climbs on a chair to get to his violin, Viraj pushes him and Yuvan cries out in agony.

Banni gets worried and rushes to him while Charmie tells him that she will handle Manini.

Yuvan cries as his shoulder is injured while Manini and Viraj smirk at each other due to their plan working.

Later, the doctor informs them that Yuvan has to rest and not lift anything from his hand which has to be put in a cast.

After the doctor leaves, Manini tells Viraj to call the organizers of the singing competition and tell them that Yuvan won't be able to participate.

Yuvan cries as he apologizes to Banni while she tells him that it's all okay.

© Copyright tellybest.com, 2020, 2021. All Rights Reserved. Unauthorized use and/or duplication of any material from tellybest.com without written permission is strictly prohibited.
Cached Saved on: Friday 30th of September 2022 04:52:22 PMCached Disp on: Saturday 1st of October 2022 04:26:34 PM