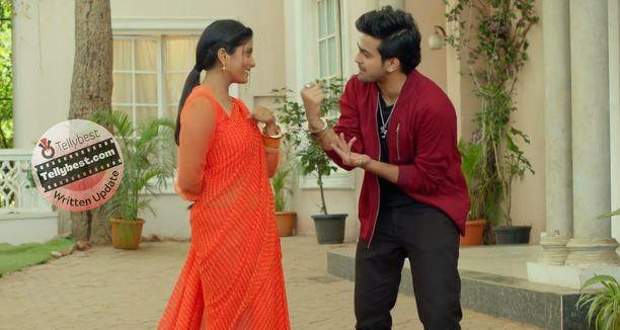 Today's Banni Chow Home Delivery 25th December 2022 episode starts with Kabir getting a call from Devraj who tells him that he is caught up in a fire.

When Kabir is about to get into his car, he finds his car locked and Banni is holding the keys.

Kabir then reminds Banni that she has a rivalry with him so she should spare Devraj and Banni reminds tells him that he should have remembered this before setting the whole slum on fire.

While Kabir looks at her with guilty eyes, Banni calls Devraj and gives the phone to Kabir to talk.

When Kabir takes the phone, Devraj advises him to keep everyone out of the rivalry and Kabir feels relieved.

A flashback shows Banni calling Devraj and ordering him to talk to Kabir so he can understand the pain.

Back in present, Banni yells at Kabir that now he can feel how sacred people get when their home is on fire.

Banni then orders Kabir to fulfill his promise and Kabir looks at her with guilt.

Afterward, when guilty Kabir apologizes to the slum people for his mistake with joined hands, the angry people are ready to beat Kabir for it.

Kabir tells the people to let him pay for the damage but the people come forward to hit him with their hands but Banni and Vishnu shield Kabir.

Afterward, while Kabir is helping the people, Banni stares at him with a happy smile and orders Vishnu to bring Kanha here so she can feed him milk.

Later, during the dinner, Banni is cooking while thinking now Kabir is taught how to love people and she offers Kabir food.

Kabir however orders Banni not to behave like a wife but Banni orders him to recreate this painting with her since this was her precious possession.

At first, Kabir denies it but when Banni blackmails Kabir that if he does not do it she will reveal that Kabir has done it purposefully.

Later in the night, Kabir puts fake lenses in his eyes to look like Yuvan, and Banni appears in front of him in a white saree.

When Banni sits close to Kabir, Kabir’s body stiffens but the painter orders him to get close to Banni.

The painter even questions Kabir if Banni is his wife or not but Kabir orders the painter to imagine the rest of it.

Banni then puts her hands on Kabir’s shoulder and Kabir locks eyes with her and a soft smile appears on his face.

Banni emotionally tells Kabir that earlier she wanted Yuvan to come back but now she likes this Kabir only making Kabir go numb for a second.

However, when Banni announces that she can be Kabir's partner to deal with the grief, Kabir stands up quickly.

The painter scolds Kabir for losing the feeling but Kabir promises Banni that he will do anything except this.

Hearing this, Banni quickly comes back with Kanha and begs Kabir to let her stay in the Rathod mansion with him.

Banni even lies that she has adopted Kanha while Kabir stares at the baby with perplexed eyes.

© Copyright tellybest.com, 2022, 2023. All Rights Reserved. Unauthorized use and/or duplication of any material from tellybest.com without written permission is strictly prohibited.
Cached Saved on: Wednesday 25th of January 2023 10:30:52 AMCached Disp on: Wednesday 1st of February 2023 08:55:46 PM