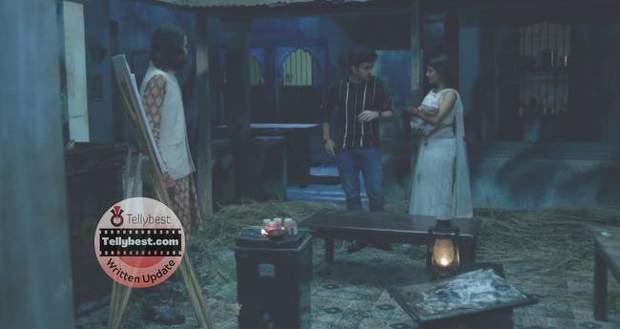 Today's Banni Chow Home Delivery 26th December 2022 episode starts with Kabir telling Banni that she can take Kaanha with her to the Rathod mansion.

While Kabir looks uncomfortable, Banni jumps in excitement and starts circling around with Kaanha in her arms.

The next morning, when Banni and Kabir are entering the house with Kaanha a garland of flowers falls on their head.

When Devraj and Viraj turn around, they get shocked to see Banni and Kabir together.

Devraj then questions Banni about the baby and Banni lies she has adopted the baby.

While Devraj and Viraj are playing with Kanha, Charmie looks at Kanha with longing eyes.

Later that night, Kabir is feeling restless in his room whereas Banni is singing a lullaby for Kanha.

Kabir feels even more restless as he recalls Banni’s words from last night and sits on the rocking chair closing his eyes.

Devraj enters the room just then and reminds Kabir how Banni used to sing the same lullaby for Yuvan causing Kabir to glare at Devraj.

Kabir then informs Devraj that Banni married Yuvan only for the money and Devraj should know it.

However, Devraj denies Kabir’s accusation of Banni and defends her by saying that Banni herself never knew his deal with her Mami and Mama.

When Devraj smiles at him knowingly, Kabir clarifies that he is going to sleep because he is sleepy not because of Banni’s lullaby.

Afterward, Devraj finds Banni sleeping beside Kaanha and gets sad thinking as he wants to see Banni and Yuvan’s baby playing around in the house.

The next morning, while Banni is delivering food to the people, she meets an aunty who praises Kabir for his active participation.

While Banni is looking at Kabir with happy eyes, some people order Banni to come with them for Vishnu, and Kabir follows them.

When they reach home, they find Vishnu trying to put a rope around his neck so he can kill himself.

Banni begs Vishnu not to do it and even some people scold Vishnu for behaving like a coward despite being Banni’s brother.

With tears in his eyes, Vishnu explains how he got suspended from the medical college because of a senior doctor giving medicine to a patient which caused the patient to go into Coma.

Hearing this, Banni scolds Vishnu for being a coward and she breaks the door with the help of people.

While Banni is yelling at Vishnu for being stupid and taking a drastic step, Kabir announces that he can help Vishnu with a smug smile but Banni has to promise that she will not return to Rathod mansion.

Banni agrees and Kabir makes a call while Banni is hugging Vishnu.

Later in the Rathod mansion, Banni tells Kabir that she will go for twenty-four hours and Kabir will miss her.

Banni even orders Kabir to take care of Kanha if he wants her gone for twenty-four hours and Kabir reluctantly agrees.

Before leaving, Banni gives Kabir a list of what to do with Kanha and Kabir looks stunned.

© Copyright tellybest.com, 2022, 2023. All Rights Reserved. Unauthorized use and/or duplication of any material from tellybest.com without written permission is strictly prohibited.
Cached Saved on: Wednesday 25th of January 2023 03:18:36 PMCached Disp on: Monday 6th of February 2023 04:19:51 AM