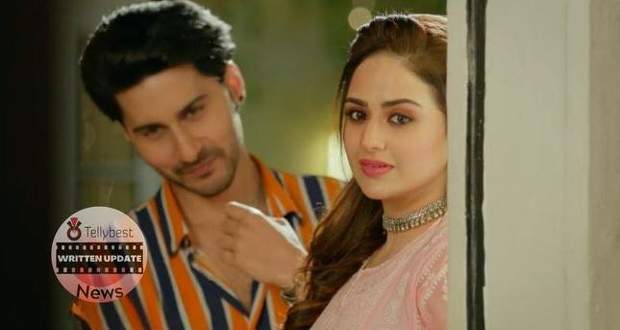 Today's Banni Chow Home Delivery 26th September 2022 episode starts with Manini acting sweet and telling Yuvan that he can participate in the singing competition next year as he needs to rest now.

Further, to make sure that nothing wrong happens, Manini says that Yuvan will stay with her.

Afterward, Manini and Banni are arguing about who will stay with Yuvan while he goes to pick up the violin and tries to play it which causes him a lot of pain.

Both Manini and Banni try to stop him while he cries and says that he has to complete his and Banni's dream.

Later, Banni wonders how she can help Yuvan and decides to call Agastya to know if she can do anything.

Banni calls Agastya and informs him about Yuvan's condition while Agastya tells him that he can help and states that he needs to meet Yuvan.

However, Banni panics and tells him that they cannot meet at the Thakur house as Manini does not want Yuvan to participate.

She tells him that she will send him the time and address and disconnects the call.

Later into the night, Manini is on the call with Pratik's doctor while Viraj comes there to inform her that Yuvan and Banni are asleep and that there is no chance of them participating the next day.

Meanwhile, Banni wakes up Yuvan and tells him to get ready as she is taking him to prepare for the singing competition.

At the same time, Agastya and Rohan reach Banni's old house and talk degradingly about the area.

Further, Agastya says that now he understands why Banni married Yuvan and states that it is because of his money.

Banni's brother welcomes Agastya and Rohan while Banni and Yuvan also reach there.

On the other hand, Manini feels restless and goes to check on Yuvan and Banni.

She sees two figures lying with comforters covering them and thinks that it is Banni and Yuvan sleeping.

Back at Banni's house, Vishnu tells her that Yuvan should not participate after hearing Yuvan's cries.

Banni agrees and tries to convince Yuvan but he refuses and begs Agastya to help him as he wants to fulfill Banni's dream of making him a rock star.

Afterward, Agastya reveals his plan and tells Banni that she will become Yuvan's left shoulder at the competition and will help him play the instrument.

Both Banni and Yuvan get confused after which Agastya puts the violin on Banni's shoulder and goes behind her while putting his hand around her to play the violin using the bow.

Yuvan takes in the steps and Agastya's advice while Banni feels uneasy in such proximity to Agastya.