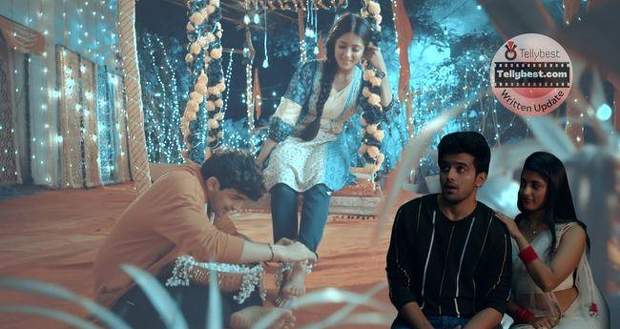 She even falls at Kabir’s feet to take his blessing while calling him “Pati Parmeshwar” and Kabir looks away.

After Banni walks away, Kabir looks at sleeping Kanha with a soft smile and feels relieved.

Much to Kabir’s bad luck, Kanha wakes up just then and starts crying causing Kabir to look at him with irritation.

Kabir even makes funny faces at Kanha to stop him from crying but Kanha starts crying even harder.

Looking at Kanha, Kabir angrily mutters that Baani has done this on purpose as she knows he hates babies.

Kabir then gives Kanha a bottle of milk as per Banni’s notes but Kanha does not drink it and cries louder.

To calm Kanha, Kabir picks him up in his arms and when he looks around, he imagines Banni laughing at him.

Kabir further puts Kanha on the bed to change his diaper with a disgusted look on his face and Kanha finally stops crying.

However, once Kanha is fast asleep, Kabir starts singing a lullaby for him just like Banni, and a soft smile appears on his face.

When Kabir decides to walk away, Kanha wraps his little hand around Kabir’s finger which melts Kabir’s heart and he falls asleep beside Kanha.

Later that day, Vishnu is talking to the pandit about Kanha’s naming ceremony and Kabir who has just arrived there with Kanha in his arms gets confused after hearing this.

Kabir announces that Kanha’s naming ceremony will not happen today while Devraj tells Kabir that Banni is the one who has arranged the ceremony.

Devraj further announces that Banni has gone out after giving Kabir the responsibility of Kanha with a hint of a smile in his voice.

Realizing Banni has arranged everything intentionally, Kabir informs everyone that he will not stay at home for the naming ceremony.

At the same time, Banni appears at the mansion wearing a white saree, with white hair, fake moul under her lips, big glasses, and a long veil on her head, and behaves like she is very old.

With a stick in her hand, disguised Banni introduces herself as Banni’s Kashi Bua (aunt) and scolds Kabir for giving the baby to someone else when it is his responsibility.

Kashi Bua further announces that if Banni is blackbelt in Karate then she is stronger compared to Banni.

Looking at Kabir, Kashi Bua circles her stick while muttering that Banni has given her the responsibility to make sure Kanha’s naming ceremony goes well.

Arrogant Kabir tries to give Kanha’s responsibility to someone else in the family but everyone walks away with excuses.

Later in the ceremony, Kabir’s eyes fall on Kanha’s innocent face and he feels love for the baby.

Kabir even hugs Kanha with a kind smile after closing his eyes while Banni looks at them with love.

Looking at Kanha and Kabir, Charmie gets anxious as Banni is close to fulfilling her promise and she gets upset.

Meanwhile, Kabir opens his eyes and puts Kanha down quickly and his face again becomes hardened.

The pandit then asks Kabir to name the kid and Kashi Bua suggests weird names like “Tinkuri Lal” but Kabir announces that he will name the kid.

Looking at Kanha, Kabir names him "Atharva" while calling Kashi Bua “Budhia Bua” for which Kashi Bua hits him on his back.

After the function, Kashi Bua orders Kabir to give something to Atharva and Kabir happily puts a gold chain around Atharva’s neck.

On the other hand, Charmie plans to take a drastic step to force Banni to give the baby to her.