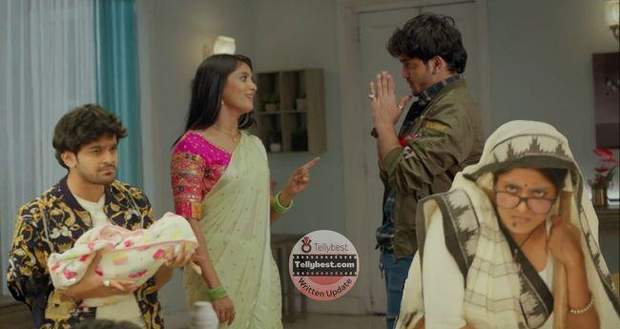 Today's Banni Chow Home Delivery 28th December 2022 episode starts with Kashi Bua (Banni disguised as an old lady) making an excuse for not meeting Banni and trying to walk away.

However, Kabir stops her and requests her to takes away Atharva as no one in the house is able to take care of him.

Kashi Bua slaps Kabir on the back of his head and tells him how she can take care of a baby when she is surviving with great difficulty.

Later, the servant brings out Atharva crying and Kabir takes him in his arms lovingly.

Atharva stops crying immediately and Kashi Bua looks at them and walks away stress-free.

Suddenly, Kabir gets a call from an important client and gives Atharva to the family members.

However, Atharva starts crying while Kabir talks distractedly as Atharva is crying furiously.

He cuts the call and takes the baby in his arms and swings him in the air, shushing him.

Kabir blames Banni’s Bua for dumping the baby on him who only stops crying when he is in his arms.

Devraj states that Atharva feels a connection with Kabir but he denies his statement as he thinks Banni has adopted the baby.

Outside the house, Kabir walks out and overhears Kashi Bua and Myra talking about Atharva choosing Kabir as he has seen the hidden humanity in him.

Later, Kashu Bua sees Charmi giving a bundle of cash to a man and sends him away hurriedly when she hears Viraj’s voice.

Viraj walks to her and tells her that Shrey is crying and she walks away without batting an eye at him.

At night, in Kabir’s room, Atharva cries and Kabir finds out that he is crying because of darkness.

He keeps the lights on even though he wants them off.

Later, Atharva cries and Kabir walks to him frustrated and picks him up.

He shushes Atharva and makes him a bottle of milk and sits in the rocking chair and they sleep soundly.

Kabir wakes up from the shrilling voice of the alarm and puts sleeping Atharva back in his crib.

Later, Kabir waits for Banni as 5 minutes are left for their 24-hour challenge.

He is standing on the first floor and keeps the baby in the air threatening to drop it.

Everyone gathers in the living room to stop Kabir from doing anything to Atharva while Kabir apologizes to him for doing this.

Kabir has counted to 8 when some people enter with a dead body wrapped in white cloth.

Frustrated Kabir descends the stairs and picks up the white cloth and gets shocked to see Banni’s dead body.

Everyone starts crying and the man explains that Banni died in an accident.

Kabir stands shocked and starts to shout at Banni as she promised to return in 24 hours.

He exclaims that he will not keep Atharva and puts him near Banni’s dead body.

Virat consoles Kabir and urges him to take care of Atharva as he is comfortable with him only.

Charmi takes the chance to pick Atharva but Kabir takes him away from her.

Kabir announces that Atharva will not live with Charmi while the man who brought Banni states that her last wish was to get cremated in Rathod mansion by Kabir's hands.

© Copyright tellybest.com, 2022, 2023. All Rights Reserved. Unauthorized use and/or duplication of any material from tellybest.com without written permission is strictly prohibited.
Cached Saved on: Wednesday 25th of January 2023 11:59:22 AMCached Disp on: Wednesday 1st of February 2023 09:37:33 PM