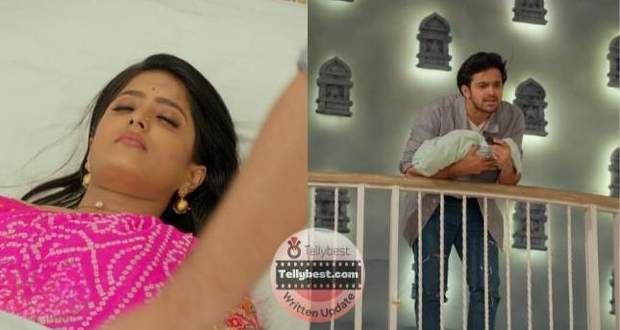 He begs Banni to wake up as his fight with Banni is incomplete with tears in his eyes.

He further screams that Banni cannot leave him alone as no one can fight him like her while everyone breaks down in tears.

Banni opens her eyes just then which startles everyone and she questions Kabir why he is crying.

While everyone looks at Banni with shocked expressions, Kabir gives Banni death glares.

Entering the Rathod mansion simultaneously, Vishnu questions Banni if she is okay and Banni replies positively.

Angry Kabir grabs the collar of one of the people who brought Banni here and yells at him for declaring Banni dead.

Meanwhile, Banni also scolds that person for listening to a drunk uncle and Devraj also screams that this person has played with their emotions.

Banni then reminds Kabir about how she promised that Kabir would urge her to come home and Kabir scolds her for playing dirty.

He even accuses Banni of playing with everyone’s emotions in a harsh voice but he lowers his voice when Kanha starts crying.

Without caring about Kabir’s anger, Banni tells him that she loved Kabir’s worry for her but Kabir walks away after giving Banni Kanha.

Banni even tells Kabir that everything is legal in love and war while Charmie looks irritated.

Later that night, Banni overhears Kalpana advising Kabir not to listen to Banni as she is sure Banni is here just for the money.

After Kalpana walks away, Banni enters Kabir’s room to tell him that she is hungry for love not money but Kabir orders her to go with the toys.

While Kabir looks away, Banni puts the toys down quietly and locks the door behind her.

Banni informs Kabir that they need to discuss what Kabir feels about Banni when Kabir orders her to open the door.

Kabir hits Banni with a pillow and they start a pillow fight with each other.

During the pillow fight, they fall onto the bed with Banni under Kabir and they get lost in each other eyes.

However, Kabir quickly stands up from the bed while muttering that now he will open the door but Banni stands up against the door.

Banni again hugs Kabir and starts calling him “Pati Parmeswar” and does not let him go and starts circling around holding Kabir.

While Banni and Kabir are busy with each other, Charmie watches them from the window and thinks she needs to step up her game.

After Charmie walks away, Kabir throws Banni out of the room and locks the door in her face while yelling that he does not want to see Banni’s face.

The next morning, Kabir orders his lawyer to bring the paper as he knows how to take fifty percent of the property from Banni and once he cuts the call, Banni enters the room with a long veil on her head.

Banni tells Kabir that she will not show her face as per Kabir's order and gives Kabir the property papers.

She walks away after telling Kabir that she only wants love and she is here for that only.

After Banni walks away, Kabir gets confused as he is not able to figure out what Banni wants except property.

© Copyright tellybest.com, 2022, 2023. All Rights Reserved. Unauthorized use and/or duplication of any material from tellybest.com without written permission is strictly prohibited.
Cached Saved on: Wednesday 25th of January 2023 10:45:16 AMCached Disp on: Tuesday 31st of January 2023 06:58:26 PM