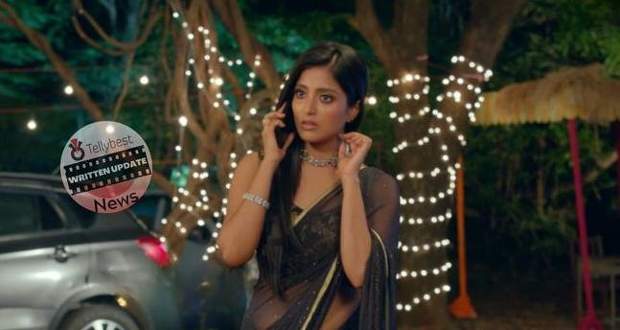 Today's Banni Chow Home Delivery 29th October 2022 episode starts with Banni seeing the Split Personality Disorder patient and telling the patient's wife that she will beat him until his Bablu (Split Personality Name) is out.

In the conference rooms, Dr Sanjay explains the working of SPD and tells that Yuvan’s tarumas have given birth to a new personality.

He further explains that the new personality might turn out to be the exact opposite of the real owner while dark Yuvan thinks he has more power than innocent Yuvan.

In another hospital room, Tulika explains to Banni what SPD is and tells her that the other personality hates the real owner.

In the conference room, Dr Sanjay tells everything to Yuvan who is disguised as Banni and tells that the dark personality is left-handed.

Meanwhile, Banni asks Tulika how a person can be left-handed while being right-handed all his life.

Dark Yuvan smirks and puts his legs on the table and removes the dupatta.

He chants the name “Kabir Singh Rathore” loudly and grabs the doctor's hand and locks them behind his back.

Kabir (Yuvan’s Split Personality Name) puts the doctor on the table and grabs his neck.

On the other hand, Banni thanks Tulika for telling her about SPD as she never knew that this kind of disease existed.

Meanwhile, Kabir tells the doctor that Yuvan was weak, cowardly and kind while he is stubborn, brave and born to win.

He tells the doctor that he loves Bunty and she is his treasure and threatens the doctor to not tell the truth to anyone.

The doctor agrees and runs out of the room to tell Banni the truth but Kabir follows him and throws a pot at Sanjay's head.

Kabir hides behind the door while Banni runs to the doctor's side and he points towards Kabir.

Banni turns her head in that direction and sees no one and gets confused.

The ward boys bring a stretcher and take Dr Sanjay away leaving Banni in a dilemma.

Later, Banni reaches home and her anticipation to meet Yuvan crosses every limit.

She enters the house and Hemant throws her bags at her foot and tells her to get out.

Just then, Hemant makes fun of Banni as Yuvan left her midway through the party.

However, Banni tells him that Yuvan will confess his love to her but Hemant calls her a gold digger.

In Yuvan’s room, Yuvan is playing the violin recalling his precious moments with Banni.

He says he will confess his love to her after the final round of The Rocking Star round.

Meanwhile, Banni declares that she will confess her love to Yuvan after his last round.

However, she also states that if he does not accept her proposal she will leave Rathore's mansion forever.

© Copyright tellybest.com, 2022, 2023. All Rights Reserved. Unauthorized use and/or duplication of any material from tellybest.com without written permission is strictly prohibited.
Cached Saved on: Monday 21st of November 2022 07:08:01 AMCached Disp on: Thursday 1st of December 2022 01:01:09 PM