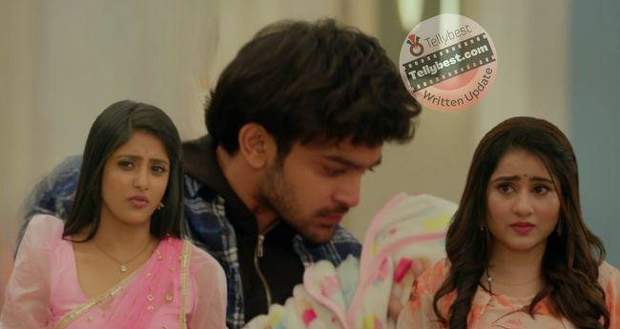 Today's Banni Chow Home Delivery 2nd January 2023 episode starts with the doctor telling the Rathod family that they need to make sure Kabir does not take any more stress and should take some bed rest.

Looking at Kabir, Devraj expresses his worry about Kabir leaving the house again when he wakes up but Banni announces that she knows Kabir will not leave.

Devraj further announces that they need to do Kuldevi’s Puja to get rid of the bad omen which has fallen over their head.

When Banni replies that Kabir will not be able to travel, Devraj orders Banni to stay with Kabir and solve their problems.

After everyone walks away, Charmie urges Banni to forgive her for risking Kanha’s life but Banni does not even look at her.

Later, when Kabir wakes up from his sleep, he gets agitated to see Banni and Atharva in his room and orders her to leave his room along with the baby.

Banni informs Kabir about everyone visiting Kuldevi temple and that Devraj has ordered her to stay with Kabir.

Hearing this, Kabir tells Banni that he can take care of himself but he struggles to even lift his injured arm.

Seeing Kabir in pain, Banni announces that neither she nor Atharva will leave the house until Kabir gets better.

However, Banni then brings food for him who tells Banni that he can eat himself since his other arm is perfectly fine.

When Kabir struggles to put food in his mouth, Banni starts feeding him while muttering that this is not the first time she is feeding him.

During this, Banni gets emotional recalling the times when she used to feed Yuvan like this, and Kabir gets lost in Banni’s eyes.

At the same time, Atharva starts crying which causes Kabir to panic and he orders Banni to feed Atharva.

In reply, Banni tells Kabir that he needs to take medicine so she will tend to Atharva afterward but Kabir scolds her for making a child wait.

Later that night, Kabir wakes up from sleep and is surprised to see Atharva missing.

He tries to wake Banni up but Banni pretends to be sleepy so Kabir walks away to check on Atharva.

When he enters the hall, he finds Atharva in the cold weather and scolds Banni for being careless.

Banni further reminds Kabir about Atharva being his baby but Kabir starts yelling at her for risking Atharva’s life.

Looking at Kabir’s worried face, Banni tells him that she has done this just to show him how much he cares for Atharva, making him pause.

Kabir even questions Banni about why she always sees good in him and Banni announces that she knows there is a soft heart inside this rude personality.

She even tells him that Kabir and Yuvan are the same to her, but Kabir announces that this is not true.

When Banni asks Kabir what he would do if Atharva is in danger, Kabir informs her that he does not know.

Hearing this, Banni announces that she will leave the Rathod mansion as he does not care for them along with Atharva which shocks Kabir.

© Copyright tellybest.com, 2022, 2023. All Rights Reserved. Unauthorized use and/or duplication of any material from tellybest.com without written permission is strictly prohibited.
Cached Saved on: Wednesday 25th of January 2023 10:21:27 AMCached Disp on: Thursday 9th of February 2023 04:56:18 AM