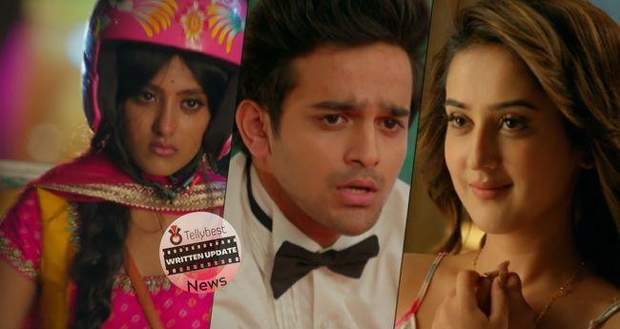 However, Kabir shouts at her that he is not Yuvan and tells her that she wanted him to bond with the family who tortured Yuvan and hurt him.

Kabir accuses Banni of coming in between him and Tulika which is why she has to go.

Kabir further throws her into the coffin to bury her.

However, Banni tries calling out to Yuvan as she keeps shouting his name and telling him that she is his Banni.

Back at home, Charmie and Viraj are talking about Yuvan betraying Banni when a servant comes there and gives some documents to Viraj who is shocked upon reading the contents.

Elsewhere, Myra tries to convince Debraj to bring Banni back home and reveals that he has gone to Banni only.

Meanwhile, Yuvan and Kabir keep switching back and forth but Kabir takes charge as he pushes the coffin into the ditch in the ground and starts filling it up with dirt and soil.

Viraj comes to Debraj and reveals the documents of the land that Yuvraj has bought without discussing it with the family first which is against the business rules.

Elsewhere, Agastya worries for Banni when a neighbor sees him and informs him that Banni has gone somewhere with her husband.

Agastya finds Banni's location by tracking her phone and reaches the jungle to save her.

Meanwhile, Kabir reaches the hospital but Tulika keeps ignoring him.

As a result, Kabir injures his hand using a glass bottle and forces Tulika to treat him.

Back in the jungle, Agastya shouts for Banni while she pushes against the headboard of the coffin to make the ground move a little.

Agastya notices the movements and starts removing the dirt to save Banni from dying of a lack of oxygen.

Banni recalls all the info that Tulika had given her about split personality disorder and realizes that Kabir is Yuvan's new personality.

Tulika treats Kabir and tells him to not show his face to her again while Kabir gets angry.

He throws the chair towards Tulika's table and leaves telling her that he's ready to bear the pain so that she can meet him.

Meanwhile, Agastya saves Banni and brings her home while she is unconscious.

The next morning, Banni wakes up and demands to go to Yuvan while Agastya gets angry at her for going to Yuvan.

Banni gets frustrated as she reveals to Agastya that Yuvan has split personality disorder.

© Copyright tellybest.com, 2022, 2023. All Rights Reserved. Unauthorized use and/or duplication of any material from tellybest.com without written permission is strictly prohibited.
Cached Saved on: Monday 21st of November 2022 08:00:01 AMCached Disp on: Saturday 10th of December 2022 03:28:43 PM