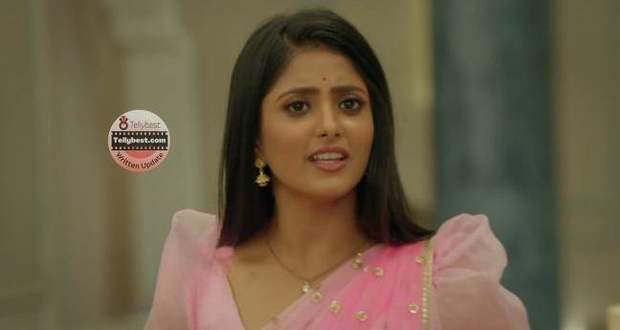 The doctor informs her he’s out of the station while Myra enters the room and Banni tells her the problem.

At the same time, Kabir enters the room with the doctor and gets Atharva checked.

Banni thanks Kabir and calls him Swami, irritating him out of his wits.

They both crash when she is finding Atharva’s medical reports and he holds her by her shoulders.

Irritated Kabir asks Banni to remove her ghunghat and stop this drama but she urges him to remove it.

Kabir removes the ghunghat and the doctor inquires about the baby’s name.

Both Banni and Kabir answer Kanha and Atharva respectively and she tells him to use Atharva only.

Kabir explains to Banni that he named the baby because her stupid Bua was giving names for Kabha’s name-giving ceremony.

In the morning, Banni tends to Devraj's needs and Kabir observes her actions carefully.

He concludes that she is not behind Rathore’s money and wonders why she is here.

At the same time, Myra enters the living room scared and asks Banni if she took Kanha from her room.

Banni denies and Myra informs everyone that Kanha is missing from her room.

Everyone gets scared and starts to find Kanha in the whole house while Banni cries.

Banni runs from one corner to another in hope of finding her baby but unfortunately, there was no trace of him.

Kabir stops Banni and assures her that he will find Atharva no matter what.

Devraj insists Kabir call the police commissioner but Banni gets a video call from the kidnapper.

Banni gets emotional seeing Kanha in the kidnapper's hand and gets shocked when she sees Raja the Gunda holding the baby.

Raja exclaims that he is the father of Kanha and he is the result of the relationship between him and Banni.

Banni asks him to shut his foul mouth and declares that he has no relation with her or Kanha.

Raja accuses Banni of marrying Yuvan to acquire 50% of Rathore's property when she was pregnant with his child.

Veer accuses Banni of infidelity but Kabir defends her as she was the reason he fought with Yuvan so vigorously.

Kabir states that she fought with everyone to find the culprit of Vandana’s murder and asks Raja about the amount of money he wants in exchange for Kanha.

However, Raja recalls Charmi offering him unlimited money to not accept any bribe from the Rathore family in exchange for Kanha.

After the call, Banni cries and falls to her knees and Kabir holds her, consoling her.

Later, Banni recalls Charmi giving a bundle of cash to someone and she goes to confront her.

Charmi accepts Banni’s accusation and demands she give Kanha to her.

Banni grabs Charmi’s throat and scolds her for putting a child’s life in danger due to her own motives.

Banni demands Charmi to call Raja and bring back the baby but she refuses and threatens her that if Banni goes out of the house she will kill the child.

Banni slaps Charmi and asks her what she will gain by doing this but Charmi has already lost all hope by delivering a mentally retarded child.

Charmi demands that Banni give her the child unless she wants to lose it.

© Copyright tellybest.com, 2022, 2023. All Rights Reserved. Unauthorized use and/or duplication of any material from tellybest.com without written permission is strictly prohibited.
Cached Saved on: Thursday 26th of January 2023 03:25:13 AMCached Disp on: Tuesday 31st of January 2023 07:55:37 PM