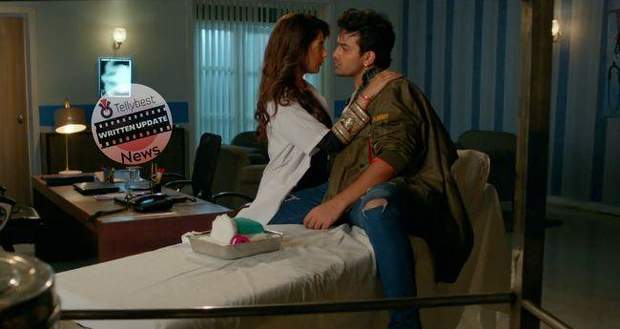 Today's Banni Chow Home Delivery 30th October 2022 episode starts with Agastya asking Banni about not telling Yuvan about her marriage to him when he could not recall anything after his surgery.

Banni shares with Yuvan that in the past few days, she has fallen in love with the new Yuvan.

She blushes while talking about Yuvaan and her feelings for him.

After a while, Banni tells Agastaya that she will confess her love for Yuvan today in front of the whole world and asks Agastya to help her.

Meanwhile, the competition for the rocking stars has begun and contestants have to sing duet songs today.

Later, Yuvan is called on stage and the crowd shouts madly for him.

Yuvan is paired with Tulika Anand who is a neurosurgeon.

Tulika is surprised to see Yuvaan while Banni recognises her too.

Yuvaan’s words ring in Tulika's mind when he assured her that she is not alone and he will always be there for him.

After a while, Yuvaan and Tulika begin singing “Rang de to Mohe Gerua”.  Meanwhile, Tulika holds hands with Yuvaan which puzzles him while Banni also looks surprised.

Later, Banni recognises the ring that she has given to Yuvaan before surgery.

After the performance, Yuvaan is searching for Banni when Tulika asks him about not telling her about his singing talent the other day which confuses Yuvaan.

Later, in the dressing room, Banni enters to see Yuvaan changing and turns around blushing furiously.

She offers to come later but Yuvaan stops her and calls her back and later teases her with Tulika’s name.

Banni feels jealous but pretends to act normal while Yuvaan sees right through her.

On being asked about Tulika wearing his ring, Yuvaan teases Banni saying he has given her the ring.

However, Seeing Banni’s long face makes him confess that he has never given a ring to a girl in his life.

Leaning closer to Banni, he tells her that whenever he will give a ring to a girl then that girl will be special.

Meanwhile, Tulika is thanking Agastya for giving her a break and always being supportive of her.

Agastya praises her singing and tells her that she matches Yuvaan in his singing tonight.

After a while, Yuvaan comes to talk to the media when he sees Tulika looking tense while talking on the phone.

Tulika’s crying triggers Yuvaan's split personality and Kabir takes over him and he goes to her asking her who is giving her a tough time.

He tells Tulika that as long as he is there nobody can hurt her.

© Copyright tellybest.com, 2022, 2023. All Rights Reserved. Unauthorized use and/or duplication of any material from tellybest.com without written permission is strictly prohibited.
Cached Saved on: Monday 21st of November 2022 10:28:01 AMCached Disp on: Tuesday 29th of November 2022 09:36:04 AM