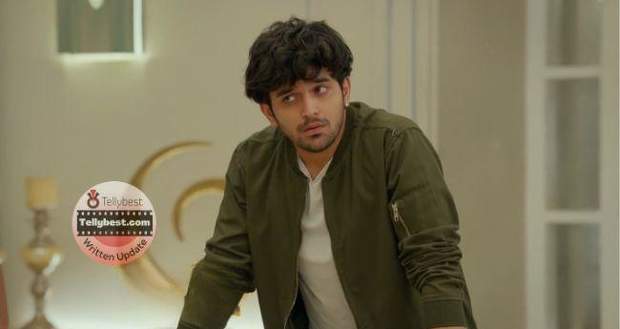 Once Banni walks away, Charmie says that she knows Banni is hurt but she will take Kanha and Shrey far away from the Rathod mansion and make a new life with them.

Meanwhile, Kabir orders the police officer to track Raja’s phone while Devraj questions god why happiness does not last long in his family.

At the same time, Viraj asks Devraj why Raja will lie about his son, but Kabir announces that he knows Banni will never hide the truth about pregnancy.

While Viraj looks agitated, Kabir defends Banni by saying that he knows Banni will never lower her dignity.

Vrinda also takes Banni’s side and announces that they need to help Banni in this hard situation which makes Viraj pissed.

Arriving there at the same time, Banni tells Kabir that they need to start searching for Raja who informs Banni that Raja’s phone is untrackable due to an app.

Banni further informs everyone that she heard a train sound in the background when Raja called them.

After Banni and Kabir walks away, Charmie calls Raja to order him to make sure Banni does not reach Kanha to which Raja informs her that his goons are waiting for Banni and Kabir.

Later, Kabir stops his car in the middle of the road when he notices a few men standing there.

Once Banni and Kabir come out of the car, the head of the gang informs them that they cannot go from this route as it is closed.

Hearing this, panicked Banni tells Kabir that they need to use the route to reach Kanha fast while the head of the goon threatens them to turn their car.

At first, Kabir tries to talk nicely with the goons but when they start misbehaving, he starts hitting them.

Looking at one of the goons, Banni recalls seeing him with Charmie in Rathod’s mansion and questions him about what he was doing there but the goon does not respond.

Kabir asks Banni about it but she announces that she will tell him later.

Afterward, Kabir and Banni both start fighting the goons and order the head of the goon to show them the location.

Once Banni and Kabir arrive at the factory, they find Kanha lying in the middle of the factory and Banni takes him in her arms.

While Kabir is looking at Kanha, Raja hits his head from behind and they broke into a heavy fight.

With Kanha in her arms, Banni fights the rest of the goons with a stick in her hands whereas Kabir is punching Raja.

During the fighting, Raja is about to hit Kanha with a stick for his safety but Kabir stops him.

Afterward, Raja even tries to shoot Banni with a gun but Kabir comes in between which causes him to get a shoot in his arm.

Kabir then orders Banni to run away with Kanha for his safety and Banni agrees reluctantly.

However, while Raja and his goons overpower Kabir, Banni enters the godown again with Kanha wrapped behind her back and helps Kabir to fight the goons.

Later looking at Kanha, Kabir tells Banni that he feels he has a relationship with Kanha and Banni thinks now Tulika will feel happy hearing Kabir’s words.

Afterward, when Kabir and Banni return to Rathod mansion, everyone gets happy to see Kabir's careing for Kanha and Bnani helps Kabir with his wounds.

Later, Banni reveals to everyone about Charmie's intentions while Charmie looks guilty.

© Copyright tellybest.com, 2022, 2023. All Rights Reserved. Unauthorized use and/or duplication of any material from tellybest.com without written permission is strictly prohibited.
Cached Saved on: Wednesday 25th of January 2023 01:37:24 PMCached Disp on: Sunday 5th of February 2023 04:32:04 AM