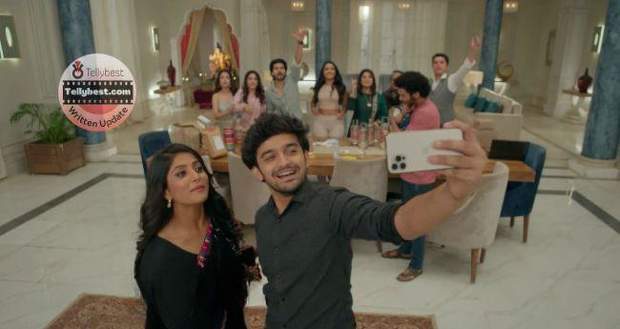 Meanwhile, in Banni’s home, Banni tells Atharva that she knows Kabir will come back one day to take them back to Rathod’s mansion since he has fallen in love with Atharva.

On one hand, Banni is shedding tears while hugging Yuvan’s favorite tiffin box, on the other hand, Kabir finds himself missing Banni even more.

He even kisses the pillar recalling how Banni used to hug him and when he enters his room with a poker face, he meets Yuvan who orders Kabir not to fight his heart anymore.

Yuvan even tells Kabir that his heart has fallen in love with Banni and Atharva whereas Kabir’s ego wants to hate Banni.

While Kabir looks scared, Yuvan advises Kabir to start a happy life with Banni and Atharva instead of fighting her always.

Hearing this, Kabir emotionally tells Yuvan that he is tired of always hating everyone, and Yuvan vanishes.

Afterward, Kabir lets out a scream and decides to take Yuvan’s advice.

On the other hand, panicked Banni asks Vishnu if he has seen Atharva since she cannot find anywhere in the house.

Banni even expresses her worry about someone stealing Atharva but Vishnu urges her to calm down.

At the same time, Banni notices Kabir approaching her in a truck with a band and the Rathod family.

While Banni looks surprised, Kabir happily tells Banni that he is not good with romantic words and that Atharva is really small.

When Banni tells Kabir that she is ready for marriage, everyone starts dancing in happiness.

The next morning, Banni finds Kabir narrating her journey to everyone and how her love changed Yuvan’s life with a happy smile.

Banni gets emotional and Kabir announces that Banni has the only dream of making her Banni Chow Home Delivery business a big hit.

A photographer then orders Banni and Kabir to start shooting for the ad campaign and Banni expresses her nervousness to Kabir who advises Banni not to worry.

During the shoot, Kabir refuses to eat and starts running around like the way Yuvan used to run whenever Banni tried to feed him.

Banni even makes Kabir taste Yuvan's special kheer which brings a smile to Kabir's face and they end up getting lost in each other's eyes.

While Banni and Kabir are busy staring at each other, the flashback shows Banni and Yuvan's happy moments.

Later, everyone in the Rathod mansion is busy packing the tiffin boxes as Banni is getting so many orders while Kabir announces that no one thought the food delivery journey can be this beautiful.

Banni then orders everyone to gather so Kabir can take a happy selfie and everyone nods.