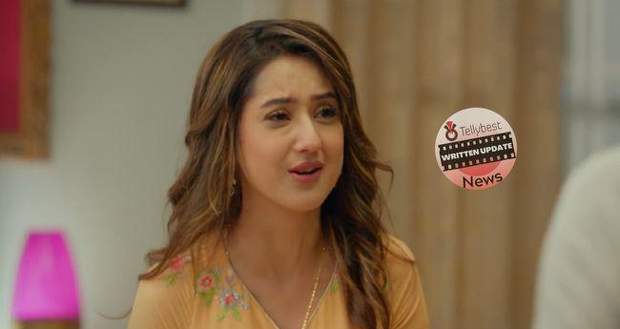 Today's Banni Chow Home Delivery 3rd November 2022 episode starts with Dr. Sanjay agreeing with Banni and telling Agastya that Yuvan has a split personality disorder and that Kabir is his other personality.

The doctor informs them that Yuvan's disorder is likely due to his trauma and that his subconscious mind has created a more violent personality to fight against those who have mistreated him.

Elsewhere, Kabir reaches the Rathod house on a bike and enters the home with swag.

The doctor informs Banni and Agastya that Yuvan does not know about Kabir but Kabir knows everything about Yuvan and will take advantage of it.

The doctor also reveals that he had called Banni earlier to inform her of it but Kabir had arrived there and beaten him up to keep his secret.

Back at the Rathod house, Kabir throws some official documents on Viraj's face and orders him to sign them.

Kabir reveals that by saying those papers, he is agreeing to transfer the rest of the power of attorney that Manini had given him to Yuvan.

Veer takes a stand for Viraj while Hemant says that Yuvan isn't wrong as Viraj had supported Manini who turned out to be an enemy of the family.

However, Viraj argues that he changed himself for the family and became loyal to the family.

Kabir insults Viraj and calls him a snake while revealing that he was the one who had slapped Veer and turned Viraj into a girl.

Viraj says that he will not sign the papers at any cost while Kabir tells the family that they all will suffer if they can't make Viraj sign the papers by the time he has breakfast.

Elsewhere, Dr. Sanjay informs Banni that Kabir shouldn't even get a whiff of their plan to cure Yuvan as it is almost similar to killing off Kabir.

If he learns the truth, Kabir will want to kill off Yuvan's personality and become the main alter ego.

Banni tells Agastya that she has to save her Yuvan at any cost while Agastya stops her and argues with her saying that he cannot let her risk her life again.

Agastya locks Banni inside the room and tells her that he is doing this for her safety.

On the other hand, Kabir brings a bulldozer outside the Rathod house and shouts to the speaker to get the papers signed by Viraj or see their beloved home getting demolished.

Debraj tells Yuvan to not forget that he was also born and brought up in this ancestral house.

Kabir gets angry and shouts that he knows who did what with Yuvan in this house that they call home.

Debraj tries to stop him by talking about Yuvan's mother but Kabir says that it won't work on him.

In the end, Kabir thinks to amuse himself and gets down from the bulldozer while telling the family that if Viraj can free his hand from his grip, he will leave the house as it is.

However, if Viraj loses, the house will be razed down.

© Copyright tellybest.com, 2022, 2023. All Rights Reserved. Unauthorized use and/or duplication of any material from tellybest.com without written permission is strictly prohibited.
Cached Saved on: Monday 21st of November 2022 04:24:48 AMCached Disp on: Thursday 1st of December 2022 02:19:28 AM