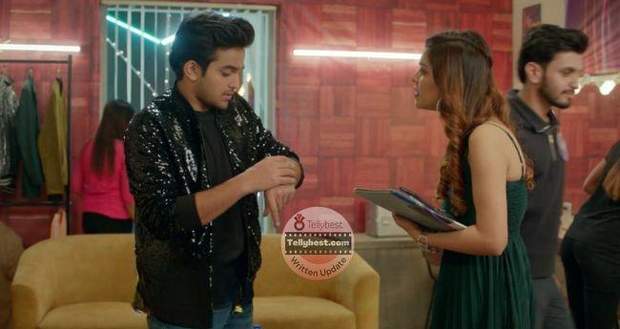 Today's Banni Chow Home Delivery 4th December 2022 episode starts with Devraj telling Banni not to think about any trouble since it is Yuvan’s final round.

Tulika then informs Banni and Yuvan that she has withdrawn her name from the competition.

Banni thanks Tulika for all her doing but Tulika orders her to close her mouth and Tulika even wishes Yuvan luck who gives her a smile.

After Banni and Yuvan walk away, Devraj also orders Tulika to stay away from Yuvan as it brings Kabir out of Yuvan all the time.

Turning to leave, Tulika’s eyes fill with tears as she recalls Kabir’s smiling face and runs away from there.

Meanwhile, Hemant mutters angrily that Banni has not won yet as the game has just begun.

On the other hand, in the competition set, Yuvan urges the worker to bring Banni to him before his performance and the worker goes to call her.

While Banni is urging the forensic team to come quickly to Rathod’s mansion since it is a hardship for Banni to keep the mannequin in the house, a worker urges her to come to Yuvan’s dressing room.

In the meantime, Tulika is sobbing in her home while recalling Kabir when she gets a call from someone who talks in Kabir’s voice.

Back in Rathod’s mansion, Hemant pauses Kabir and Tulika’s wedding video and announces that now Tulika will rush to her Kabir in an evil tone.

Like a creepy, Hemant tells himself that he is very angry at Banni for coming between him and his love Vandana.

He also yells that he used to give Yuvan medicines just to keep Yuvan safe and now he will not let Banni threaten his twenty years of hardship.

He even adds that he has done this so he can keep his family intact so he is not the villain and now Kabir needs to come back as he will never take his name.

Elsewhere, in the competition set, Kabir is waiting eagerly for Banni and Banni arrives there at the same time.

Taking Banni’s hand in his, Yuvan confesses his feelings for her and adds that he will win the trophy just for her.

Banni also lovingly tells Yuvan that she will give lord Ganesha laddoo once Yuvan wins the trophy.

Meanwhile, frustrated Agastya tells Rohan that he will only give Yuvan seven out of ten as he does not deserve to win.

Back in the dressing room, noticing the camera turned off, Banni tells Yuvan that she needs to go home to catch the killer.

Meanwhile, Tulika is restless as she believes her Kabir is back whereas Agastya rolls his eyes when he finds out Yuvan will perform last.

Elsewhere in Rathod’s mansion, Banni gets shocked to see Vandana’s statue in the fire, and Banni gets hit by a car when she comes out of the house.

Yuvan who is waiting for Banni calls out to her suddenly.

© Copyright tellybest.com, 2022, 2023. All Rights Reserved. Unauthorized use and/or duplication of any material from tellybest.com without written permission is strictly prohibited.
Cached Saved on: Thursday 26th of January 2023 05:46:41 AMCached Disp on: Wednesday 1st of February 2023 09:33:45 PM