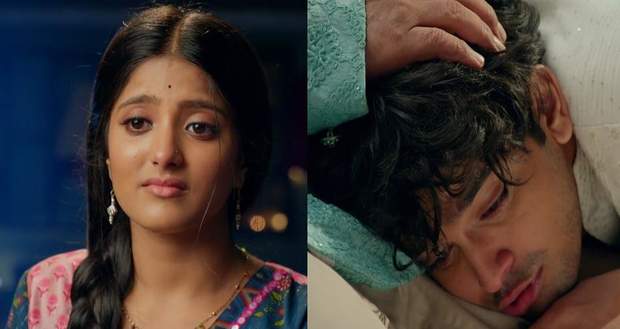 Today's Banni Chow Home Delivery 4th July 2022 episode starts with Banni asking Viraj why he has beaten Yuvan this much.

Hearing this, Viraj arrogantly says that he is punishing Yuvan for today’s drama.

He even tells Banni that if Yuvan was not his blood then he would not have any problem with him marrying Banni as both are garbage.

However, ignoring Viraj’s words Yuvan announces that he and Banni are like pulao (an Indian dish).

At the same time, Bani informs Yuvan that the ring did not come off her hand because God knew Yuvan would need her this evening.

After doing her arti, Banni asks Niyati what she will do if somebody again torches Yuvan.

This makes Niyati nervous but before she can protest Banni gives her Viraj’s belt and urges her to beat Viraj like that.

Niyati thinks this is a perfect opportunity for her to impress Debraj and agrees to do so.

Seeing Viraj getting beaten, Charmi goes to wake Manini up.

Later, Manini comes to the living room and asks Banni the reason for being there.

Banni sarcastically says that she is giving Niyati a cooking class.

On the other hand, Yuvan pleads with Niyati to stop as she is hurting Viraj.

When Debraj informs Hemnat about Viraj’s behavior, he gets red in anger and shouts at Viraj for doing it.

Instead of repenting, Viraj again informs Hemant that he was just teaching Yuvan a lesson.

Hearing this, Hemant orders Veer to control his son otherwise he will make his life hell.

Afterward, Banni advises Hemant to stay here instead of in London.

She then gives back the ring to Hemant and walks away from there.

However, when Manini tries to stop Banni, Hemant says that Banni will stop coming in two-three days.

He then takes Manini and Veer aside to scold them for Viraj’s behavior.

During the discussion, Manini and Veer try to take Viraj’s side by blaming Debraj’s Will but Hemant walks away.