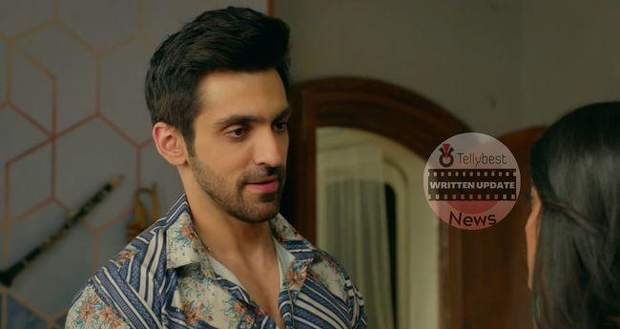 However, Agastya rejects the calls as he thinks that the Rathod family does not know how much danger Banni is putting herself in.

Banni begs Agastya to let her go and save Yuvan while Agastya wishes that he could tell Banni how much he loves her and stop her from leaving.

Banni uses this opportunity to get out and locks Agastya in the room.

Agastya shouts for her to realize that he is doing this for her while Banni responds that she has to save her husband and his family from Kabir.

Back at the Rathod house, Kabir lets go of Viraj's hand and pushes him.

Further, Viraj says that he would have happily signed the documents if Yuvan had asked him calmly but with threats, he is never going to sign the papers.

Yuvan laughs while Viraj tells him to run the Bulldozer over him before moving forward to destroy the Rathod house.

The family members get shocked while Kabir tells Charmi to calm her husband as he has no problem with running Viraj over.

Debraj has enough of his and walks forward to slap Yuvan.

However, Kabir holds his hand midair and brings it to his head as if getting blessings from it.

Kabir tells Devraj to bless victory on him and try to convince the family or else he will have to live with the guilt that he could have saved the house but did not.

Yuvan further climbs the bulldozer and counts to three before moving it towards Viraj and the Rathod house.

However, just before Kabir can harm Viraj, Banni comes there and punches him out of the vehicle.

Banni challenges Kabir and tells him that she will finish him while Kabir tells her that she is playing with fire.

Debraj asks Yuvan how he can even think about hurting Banni whom he loves.

Kabir shouts that he is not Yuvan and that he loves only Tulika.

Kabir says that he suffered enough by being Yuvan and now wants to live his life freely as Kabir with his love Tulika.

Banni once again tells Kabir that only Yuvan knows her place in his heart and not even Kabir can decide anything for Yuvan.

Further, Banni challenges Kabir and tells him that he will have to sign the papers and leave the house.

Yuvan says that they will have a hand wrestling match and gets in position while Banni sees the injury on his hand and resorts to fighting him properly.

They both rush inside the house and fight intensely as the family members try to convince Kabir to stop.

Banni finally manages to push him away and he falls to the ground while Banni recalls her promise to Yuvan that she will always save him.

© Copyright tellybest.com, 2022, 2023. All Rights Reserved. Unauthorized use and/or duplication of any material from tellybest.com without written permission is strictly prohibited.
Cached Saved on: Monday 21st of November 2022 01:04:20 AMCached Disp on: Wednesday 7th of December 2022 04:47:40 PM