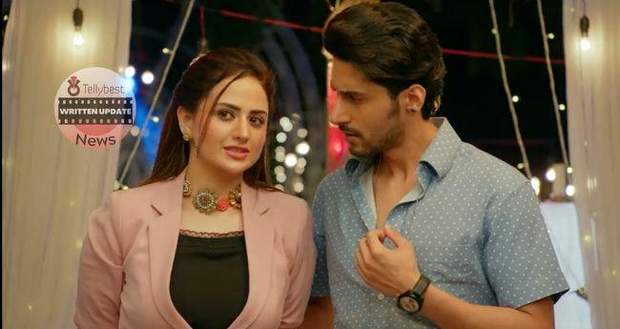 However, Viraj takes his manipulation a step further and asks Yuvan if Banni is happy with him or not.

After Viraj leaves, Yuvan stands up and sees the flowers sent by Agasthya.

He suddenly laughs to himself saying Viraj can be mad sometimes and Banni will only be happier since Yuvan has good news for her.

Yuvan walks to Banni's town where he gets stopped by Pinky who asks Yuvan to teach her how to sing so she can make her father's birthday special.

Yuvan feels shy after he sees Pinky and her father's interaction and says his baby will also call him Papa.

Twirling like a happy butterfly, Yuvan says now he can have a baby since he now knows how babies are made.

In the evening, Agasthya teaches Yuvan while Banni prepares hot, piping food for them.

Yuvan also asks Agasthya to eat Kheer while Banni says Yuvan has already made her eat five bowls of Kheer.

Yuvan did it because he thinks this is how he and Banni can become parents, just like Charmie who ate Kheer from Viraj's hands and became pregnant.

Agasthya compliments Banni for her cooking skills and says he will be glad to eat food made by Banni if she can deliver lunchboxes to him.

Agasthya feels jealous as he watches the playful banter between Yuvan and Banni and interrupts them.

Agasthya then asks Yuvan to sing for someone special for him tomorrow and Yuvan cannot think of anyone else other than Banni Dulhan.

Yuvan again asks Banni to complete the fifth bowl of Kheer so she gets pregnant successfully but Banni runs away from him.

Agasthya smiles as both Banni and Yuvan play like kids until Yuvan corners Banni.

However, he holds her chin and makes her eat the Kheer which is not liked by Agasthya.

Agasthya feels that Yuvan is being forceful but Banni says it is normal between her and Yuvan.

The next day, the auditions for the singing competition continue and Agasthya presides over them as the judge.

However, he says he will tell it once he gets on the stage.

Yuvan's chance finally arrives and he says he would like to dedicate his song to his wife, Banni Dulhan.

Banni all smiles when Yuvan says when she is with her, he gets all the strength to fight the world.

Inwardly Yuvan says he will announce the good news after his performance.

© Copyright tellybest.com, 2022, 2023. All Rights Reserved. Unauthorized use and/or duplication of any material from tellybest.com without written permission is strictly prohibited.
Cached Saved on: Monday 21st of November 2022 05:10:32 PMCached Disp on: Thursday 1st of December 2022 01:03:57 AM