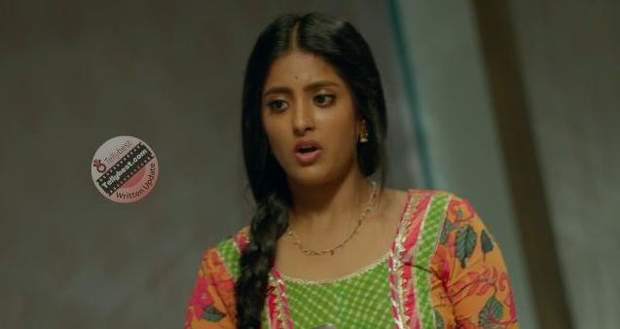 Today's Banni Chow Home Delivery 5th December 2022 episode starts with Banni being picked up on a stretcher and getting inside the ambulance after she falls unconscious.

Meanwhile, Yuvan is worrying why Banni hasn't reached for his performance and asks Devraj where she is.

Hemant tries to act normal while Viraj cools down an anxious Yuvan.

He calls Banni's phone but a stranger picks it up and informs him that Banni has been involved in an accident.

Hearing the sound of the sirens, the phone falls out of Yuvan's grasp as he asks Viraj what the stranger said.

On the other hand, Agastya is worried about Banni not showing up while Rohan asks Agastya to move forward without Yuvan.

Yuvan makes a decision not to perform & goes to Banni but Devraj asks him to reconsider his decision.

A flashback occurs where Yuvan asks Banni what wish she wants to see come true after watching the falling star.

Banni reveals that she wants to see him win the singing competition and gets shy when Yuvan proceeds to kiss her.

The flashback ends & Yuvan realises that he has to fulfill his Banni Dulhan's wish.

Meanwhile, the host tells the audience that due to some emergency, Yuvan Singh Rathod, won't be able to perform so he has to be disqualified.

Murmurs fill the whole auditorium as Yuvan's fans want to see him.

Yuvan asks Viraj to tell him details of how Banni is doing while he goes to perform and fulfills Banni's wish.

The fans erupt in a cheer as Yuvan comes on the stage and tells everyone that his wife is in the hospital but he will still perform on the stage.

Tulika who is sitting amongst the audience gets hurt when she doesn't see Kabir but Yuvan.

On the other hand, Hemanth and Viraj reach the hospital and ask about Banni's health from the doctors.

Hemanth tries to remove the oxygen mask from Banni's face but just then, Viraj enters with some security sent by Yuvan to look after Banni.

On the stage, Yuvan announces that he wants to perform while video-calling Banni at the same time so she can watch him as well.

Agastya's eyes fill with tears while Yuvan expresses his desire for Banni to wake up as soon as possible.

© Copyright tellybest.com, 2022, 2023. All Rights Reserved. Unauthorized use and/or duplication of any material from tellybest.com without written permission is strictly prohibited.
Cached Saved on: Wednesday 25th of January 2023 12:13:14 PMCached Disp on: Thursday 2nd of February 2023 07:15:16 PM