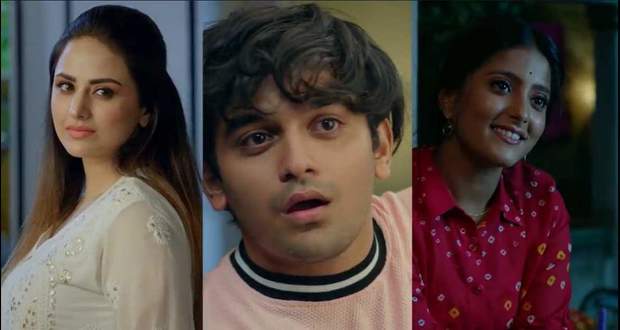 Meanwhile, Devraj and Hemant are discussing Niyati and as always Hemant takes Manini’s side.

Later in the living room, Niyati along with Manini meets Devraj and Kalpana’s mom there and Devraj informs them that Niyati will only get married to Yuvan if he thinks she is good for Yuvan’s mental health.

While Viraj is running after his wife Charmi, Yuvan comes out of nowhere and collides with him which makes Yuvan slip kheer on Viraj’s shirt.

Viraj gets angry but before he can react Yuvan runs toward the living room.

Viraj follows him and raises his hand to hit him but Banni stops him.

Banni then asks Viraj if he remembers her but Viraj ignores her and rubs the remaining kheer on Yuvan’s face.

This action makes Devarj very angry and he shouts at him for making Yuvan upset.

Seeing this, Banni also gets angry and sprays paint on his face.

While Banni is teaching Viraj a lesson, Manini shouts at her and asks guards to throw her out.

However, Devraj approaches Niyati and tells her that he thought Niyati would save Yuvan today but Niyati missed this chance to prove herself.

Further, Devraj announces that if Niyati wants to marry Yuvan, she has to become Yuvan’s protector first.

Niyati tries to sugarcoat Devraj by claiming that she likes Yuvan but Devraj is adamant.

During the chaos, Yuvan innocently asks Banni to wash his face but Banni gives this task to Niyati.

After Banni walks away from there, Manini starts ranting about Banni’s influence on the Rathod family.

Later at night, Manini along with Niyati enters Viraj’s room and discuss Banni.

Manini then asks Viraj to inject an injection on Yuvan so he stops playing the violin.

Hearing this, Niyati tries to object but Manini shuts her.