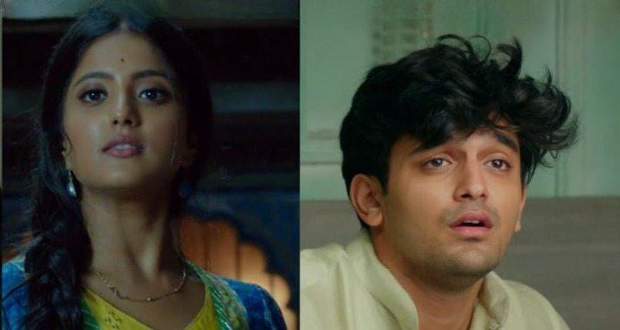 He even says that Yuvan behaves differently when he is with Banni.

On the other hand, Banni tells Yuvan via a video call that she is not scared of darkness as Yuvan is here with her.

At the same time, she hears some noises and tells Yuvan that she will talk to him after checking it.

Meanwhile, Hemant expresses that he thinks Niyati is not a good choice for Yuvan.

This statement makes Manini worried and she tells that Niyati needs more time to win Yuvan over.

She even sheds some fake tears and Hemant forgets his anger.

Afterward, Hemant informs Manini about his upcoming trip to London.

When Hemant leaves, Niyati arrives at the scene and Manini urges her to be extra careful otherwise Hemant will break her marriage.

When Myra denies him, Yuvan emotionally tells Myra if he was normal then he would not have needed her.

Hearing this, Myra finally agrees to go with him.

While leaving the house, Myra and Yuvan collide with Manini. When Manini asks them where they are going Myra lies that she is just going outside to play with Yuvan.

However, suspicious Manini gives Myra permission to go out with Yuvan.

Later while Myra is staring at the car, Hemant arrives at the doorway and asks Yuvan why he is outside this late.

Seeing Hemant, Myra once again lies that she is taking Yuvan for a long drive.

At the same time, Niyati also arrives there with drugs and urges him to take them.

However, while taking the medicine, the drug falls from Yuvan’s hand.

Seeing this, Yuvan does not say anything to Hemant and Myra starts the car.

After they leave, Hemant tells Niyati to make a presentation about Yuvan’s case to a well-known UK psychologist during his video session with Yuvan.

Hearing this, Niyati gets nervous as she is not a psychologist.

On the other hand, Raja grabs Banni’s hair and pushes her to a nearby bed.

When Banni gets up from the bed, she tries to attack but Raja throws her to the ground.

While Raja is trying to force himself on Banni, Yuvan is struggling to open the gate of Banni’s house.

© Copyright tellybest.com, 2020, 2021. All Rights Reserved. Unauthorized use and/or duplication of any material from tellybest.com without written permission is strictly prohibited.
Cached Saved on: Monday 8th of August 2022 08:10:03 AMCached Disp on: Saturday 13th of August 2022 11:36:50 PM