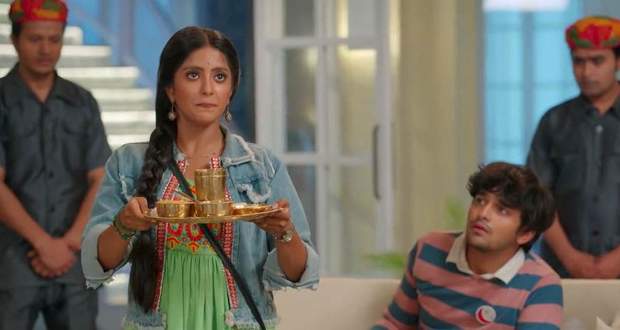 Today's Banni Chow Home Delivery 8th June 2022 episode starts with Banni questioning Manini if she even knows how to sing a lullaby.

Banni tells everyone to leave except for Manini so that she can learn how to sing lullabies to their kids and put them to sleep.

However, Manini insults her and calls her garbage while Banni gives her a quick reply.

However, Manini indirectly threatens Debraj saying that he has to live with them so he shouldn't support Banni.

Later, Manini tells Banni not to come the next day as they will be celebrating a party for Ram Navmi.

The next day, Debraj gets surprised to see pizza and pasta being served at Pooja and mock Niyati by asking her if she even knows the reason behind the celebration of Ram Navmi.

However, Malini sends her to bring Yuvan and further praises her in front of the family.

Back at Banni's house, the family celebrates the addition of a new second-hand fridge while Banni keeps the Kulfi mixture in it.

Banni and Vishnu go to the temple where they come across Raja, the goon.

Back at the Rathore house, Niyati tries to get Yuvan to come downstairs as planned by her and Manini to impress Debraj.

Viraj and Charmi are upset at not being able to go to their concert and plan something to entertain themselves.

Back at the temple, Raja tells Banni to marry him to pay off her uncle's debts but she says that she will marry him on one condition and gives him a huge basket of chilies to eat.

Meanwhile, Niyati tells Yuvraj that she's a fairy and he pours Gulabjamuns on her to clean it off with her magic.

Just then, Viraj and Charmi come there and offer to bring Yuvan downstairs while Niyati goes to change her outfit.

Yuvan gets sad and says that he wants Banni to stay in the house with him while Charmi and Viraj tell him that he has to turn into a girl to make Banni stay in the same house as him.