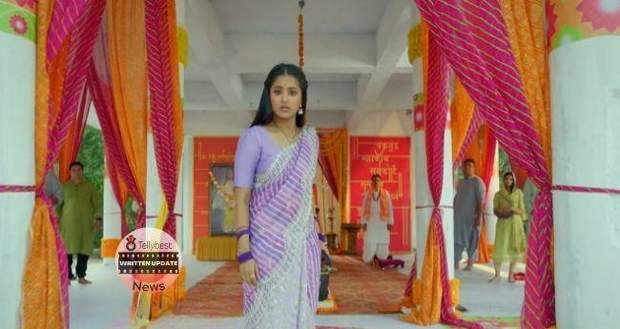 Today's Banni Chow Home Delivery 9th December 2022 episode starts with Tulika telling Banni that she will stand in the circle of fire.

Banni gets worried while Tulika points toward a fireproof gel that won't let her feel anything.

Banni gets emotional and says she never had a friend like Tulika until now & tests the gel onto herself.

Tulika strikes a matchstick as Banni tests the fire on her arm after putting the gel.

However, Yuvan sees this & gets worried.

Banni asks him to calm down while telling him about Tulika's sacrifice.

Yuvan hugs Tulika & she feels a remembrance of Kabir enveloping her.

Meanwhile, Hemanth waits for Banni & Yuvan to arrive at a temple and internally says that Banni is trying to ruin his family.

Banni gets Tulika's call who says she is ready.

While the Puja is about to begin, Tulika intentionally videocalls Yuvan and does a drama as if someone has kidnapped her.

Hemanth sees the video while Yuvan acts as if he is slowly transforming into Kabir.

Faking a headache and then putting the red and yellow colour on his face, Yuvan grabs a trident in his hand and says they have to reach Hemanth before he reaches Tulika.

Banni and Yuvan go in the marketplace to reach Hemanth but one of the man tells Banni that Hemanth went the other way round.

A flashback is shown where Hemanth figures out Banni's plan and realises that Yuvan knows he is Vandana's killer.

He curses Banni & decides to kill Yuvan and bring Kabir back so all of them can be a happy family together.

The flashback ends while Banni reaches an old room where Hemanth went but he locks her inside.

He challenges Banni to do whatever she can as he is going to bring Kabir back now.

He leaves Banni while she gets scared when she sees the fireproof gel kept intact.

She worries what kind of gel Tulika has applied onto herself and shakes the windows & the door to escape.

Meanwhile, Hemanth reaches where Tulika is and throws a matchstick toward her which forms a circle of fire.

Tulika gets scared and screams for help as she did not light this fire herself.

Meanwhile, Hemanth grins and states that Banni's ploy had everything fake including fake Kabir but his plan will have everything real, even real fire & real Kabir who is going to get awakened after seeing Tulika like this.

© Copyright tellybest.com, 2022, 2023. All Rights Reserved. Unauthorized use and/or duplication of any material from tellybest.com without written permission is strictly prohibited.
Cached Saved on: Wednesday 25th of January 2023 12:41:40 PMCached Disp on: Thursday 2nd of February 2023 07:21:46 PM