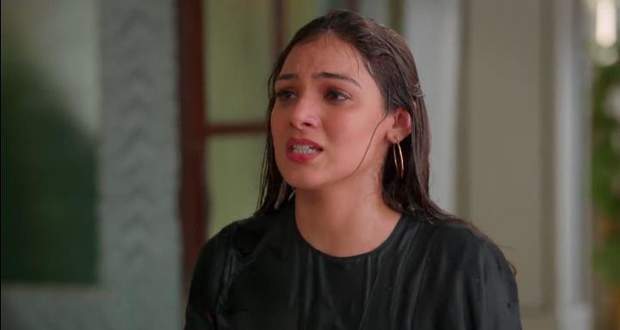 While the other guests are laughing at Yuvan, Viraj asks him if he has any more short dresses to wear.

However, Myra approaches Yuvan to ask who has done this to him while Yuvan happily replies that Viraj and Charmi have made him wear girly clothes so Banni can live with him forever.

Hearing this, Myra glares at Viraj while Viraj introduces Yuvan as an entertainer of the party.

Myra then goes to call Banni for help.

Viraj further urges Yuvan to dance and at the same moment, shocked Niyati walks away from there.

On the other hand, in Banni's home, while dancing Banni notices a poor kid and decides to feed him.

Meanwhile, in Rathod's house, Yuvan is dancing after Viraj's persuasion and gets mocked.

Elsewhere, Banni notices her phone ringing and when she picks up Myra shows her Yuvan's condition. Myra further informs Banni how Viraj has done this by taking advantage of Yuvan's longing for Banni.

Hearing this, angry Banni announces that she would grind them like the way she grinds masala.

In Rathod's house, while Manini and Hemant are getting ready in their room, Manini happily tells Hemant that a pleasant surprise is waiting for him downstairs.

When Hemant goes to attend a call, Niyati approaches Manini to inform her about Yuvan's girly attire.

When Yuvan realizes that he is being mocked he gets into a trans zone.

Further Viraj calls Yuvan a joker and asks him to do jumping for entertainment. Someone calls Yuvan a prince which makes Viraj angry and he announces himself as the prince.

When Yuvan tries to leave, Charmi puts her feet upfront which causes Yuvan to fall.

At the same time, Debraj, Manini, and Hemant enter the party and seeing Yuvan like this, Hemant angrily asks Manini if it is a surprise.

Banni arrives there and slaps Viraj hard for this.

Seeing Banni, Yuvan hides behind her while she asks everyone if they have heart of stone.

When Viraj once again calls Yuvan a monkey, Banni asks him if he is willing to wait fifteen minutes to witness Yuvan's talent.

Later in Yuvan's room, Banni dresses Yuvan in really good clothes and tells him to showcase his real talent. Yuvan hesitates at first but after Banni's reassurance, he agrees to play the violin in front of everyone.

© Copyright tellybest.com, 2020, 2021. All Rights Reserved. Unauthorized use and/or duplication of any material from tellybest.com without written permission is strictly prohibited.
Cached Saved on: Sunday 2nd of October 2022 11:54:25 AMCached Disp on: Friday 7th of October 2022 09:08:17 PM