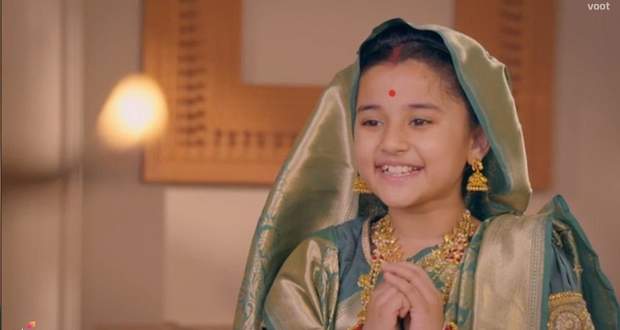 Today's Barrister Babu 12 Aug episode starts with Anirudh asking Bondita if she faced any problem last night. He asks her to knock the door twice from inside if she didn’t wet the bed and knock once if she had wet it last night.

Bondita knocks the door twice and Anirudh feels himself at cloud nine as Bondita’s problem is cured.

A joyful and delightful atmosphere prevails in the mansion after knowing that Bondita’’s bedwetting problem is cured. Bondita and Anirudh dance and celebrate their victory.

Trilochan asks Bondita to get ready and come downstairs to perform the rituals of Ekadashi Pooja. He feels grateful to God for curing Bondita’s problem at the right time.

Mahapandit begins the story behind the Ekadashi Pooja and Bondita starts recalling the magician who helped her to cure her problem.

Trilochan asks Bondita to go to Anirudh’s room and help him get ready. Meanwhile, Anirudh tells Saudamini that magician was the one who helped Bondita last night.

Bondita opens Anirudh’s cupboard to get clothes for him, but she finds magician’s clothes there. She gets really happy about finding out that the magician was Anirudh himself.

She decides to thank him for always supporting her, so she goes to the study room to find him. There she meets Saudamini who asks her the reason for her curiosity to meet Anirudh.

Bondita tells Saudamini that Anirudh disguised as a magician last night and she is grateful for him.

Saudamini gets angry at Anirudh for hiding things from her and therefore, tries to eat chilies in anger. Anirudh reaches there and scolds her for this childish behavior.

He tells her that he doesn’t consider Bondita as his wife and he helped her just because she is his responsibility.

© Copyright tellybest.com, 2018, 2019, 2020. All Rights Reserved. Unauthorized use and/or duplication of this material without written permission from tellybest.com is strictly prohibited.
Cached Saved on: Thursday 24th of September 2020 07:16:47 PM