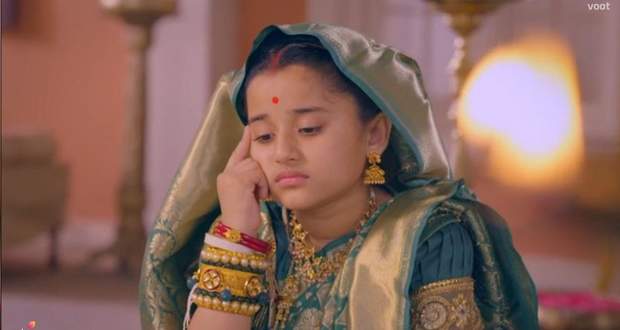 Today's Barrister Babu 13 Aug episode starts with Bondita apologizing in front of God for misunderstanding Anirudh as a grumpy man.

Anirudh tells Saudamini that he doesn’t consider Bondita as his wife and he helped her just because she is his responsibility.

He expresses his feelings to Saudamini that she was always a special person for him and will remain special for him. She feels sorry to Anirudh for her rude behavior, whereas Anirudh leaves from there in annoyance.

Trilochan asks Bondita to fulfill her responsibility of being a daughter-in-law and asks her to light a Diya in the temple.

Later, Bondita decides to do something nice for Anirudh as he helped her in curing her problem. She gets confused but then asks Bihari Babu to get Anirudh’s certificate which got soaked because of her bed-wetting problem.

She decides to clean it up and ends up clearing everything on that certificate. Meanwhile, Anirudh scolds Batuk for taking a leave from school and asks him to concentrate on his studies.

The next day, Anirudh gets ready to go to the club to play tennis with Saudamini, while Binoy stops him and asks him about his further career plans.

Bondita arrives there and thanks Anirudh for allowing a change in her life. She tells him that she wants to give him something in return, but Anirudh asks her to give it after some time as he is busy talking to Binoy.

Elsewhere, Saurav’s family gets happy on knowing about Sampoorna’s pregnancy. Saurav gets disappointed as he never had intimate relations with Sampoorna.

Anirudh discusses with Saurav about the public toilet project and asks for his suggestion. Saurav suggests Saudamini’s name that she is well educated and can help efficiently. However, Anirudh thinks that Bondita is the right choice for this project