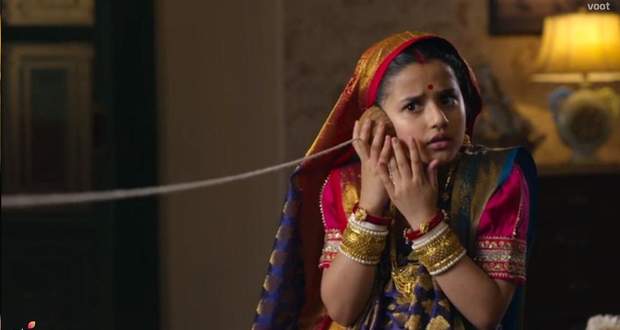 Today's Barrister Babu 1 Sep episode starts with Trilochan encouraging Bondita to become an ideal housewife. He tries to provoke Bondita against Anirudh that he didn’t take stand for Bondita.

Saudamini’s father Shivraj blames Anirudh for destroying Saudamini’s life. Meanwhile, Bondita waits for Anirudh so that she could question him about his decision.

Shivraj asks Anirudh to take Saudamini’s responsibility, while Saudamini arrives there and gives Anirudh a diary to hand it over to Bondita.

Bondita asks Bihari to bring a thread and a coconut shell. Later, she goes to meet Anirudh, but Anirudh tells her that he is busy and doesn’t want to talk to her.

Bondita makes a dummy telephone with coconut shells and asks Anirudh to talk to her through it. Bondita disguises as her mother and questions Anirudh about his faith in Bondita.

Elsewhere, Sampoorna brings a heat bag for Saurav to keep it on his wound. Saurav shouts at Sampoorna and gets angry with her for not telling the truth to the family.

Bondita keeps on questioning Anirudh about the injustice done to her as no one believed her truth.

© Copyright tellybest.com, 2018, 2019, 2020. All Rights Reserved. Unauthorized use and/or duplication of this material without written permission from tellybest.com is strictly prohibited.
Cached Saved on: Sunday 1st of November 2020 04:39:43 AM