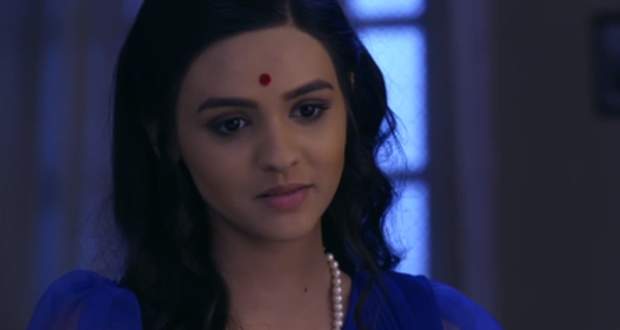 Today's Barrister Babu 9 Jul episode starts with Anirudh asking Saudamin to leave. She stays and gets close to him. She also offers to stay awake with him and help.

Saudamini stays with him and helps him cure Bondita’s problem. Later, Saudamini doesn’t wake Anirudh up and plans to let him fail.

In the morning, Trilochan wakes Bondita up and asks if her problem is cured. Bondita wakes up and sees her bed is again wet. She reveals the same to Trilochan.

Anirudh wakes up at the same time and Trilochan taunts him about the bed-wetting problem. Saudamini offers to clean Bondita while there is a lot of smell in the room.

Binoy wants Anirudh to clean the room and Bondita’s bed. Anirudh takes the bucket and cleans the bedding while throwing up. Binoy is sure Anirudh would fail while Trilochan feels bad for him.

Later, Trilochan punishes his servant and asks Bondita if she has removed the Taweez. She shows the Taweez and reveals the wound caused by it.

Bondita apologizes to Anirudh and asks him to send her back to her mother’s place. Anirudh reveals he has found the solution to her problem. Meanwhile, Saurabh is still mad at Sampurna and refuses to eat food.

Saurabh’s mother further entices him against Sampurna. Saurabh further gets mad at Sampurna and throws away the food brought by her. Later, Anirudh teaches Bondita some Yoga Asanas to cure her problem.

© Copyright tellybest.com, 2020, 2021. All Rights Reserved. Unauthorized use and/or duplication of any material from tellybest.com without written permission is strictly prohibited.
Cached Saved on: Sunday 9th of May 2021 10:42:08 PM