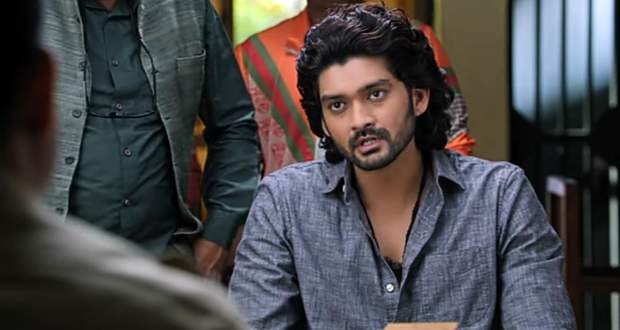 Today's Bawara Dil 4 March 2021 episode starts with Shiva going to the police station and asking why Narowt is there.

Inspector informs Shiva that Siddhi has complainers that he had kidnapped her while Shiva asks her if she has any proof.

He shows the police inspector receipts of the toll and hotel he stayed in while also showing him the pictures he took in Pune.

Siddi says that he is lying while Ishwar stops her and looks Shiva in the eyes but Shiva looks away.

Shiva starts leaving but a man comes there and slaps him.

Inspector wsks the man who he is while the man reveals himself as Shiva's father, Yashwant Lashkare.

Later, Siddhi comes to her room and sees Gaurav calling her.

She receives his call and he tells her that he can't imagine his life without her and wants to marry her.

She says that she is hurt that he doubted her while he tells her that he is coming to meet her which makes her happy.

Meanwhile, Narpat tells his goons that his plan backfired and tells them to make sure that Siddhi doesn't get married to her fiance.

Elsewhere, Gaurav is living the hotel while some goons come there and started beating him while taking Shiva and Siddhi's name.

Gaurav faints while the goons escape from there.

Meanwhile, Siddhi is waiting for Gaurav while she gets a call from someone and gets shocked.

She reaches the hospital and goes towards the ambulance while Gaurav's parents prevent her from meeting Gaurav and tells her that they want nothing to do with her as they are going back to Pune.

Elsewhere, Akka Bai is sitting at her chair while Bhavin tells her that Siddhi was kidnapped on her wedding day while Akka Bai tells him to put it in the newspapers that she is going to help the women of Shivayat.

Bhavin reveals that the kidnapper is none other that Shivs which shocks her.

© Copyright tellybest.com, 2020, 2021. All Rights Reserved. Unauthorized use and/or duplication of any material from tellybest.com without written permission is strictly prohibited.
Cached Saved on: Thursday 29th of July 2021 12:33:23 AM